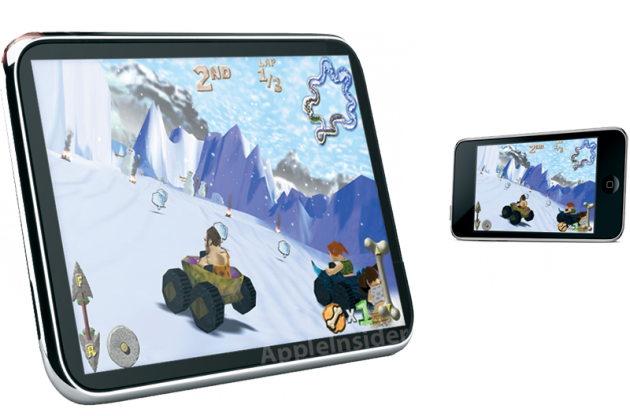 You may recall back in December, we first reported the news about Apple gearing up for the launch of a large form iPod touch. While there had been no shortage of rumors over the years about some sort of Apple tablet, our sources indicated the device would be akin to Apple’s current mobile devices, the iPhone and iPod touch, which are both seeing booming sales. A new report from AppleInsider seems to confirm this news, and gives some new details.

Most importantly, after months and probably even years of tweaking, the device is now said to have Steve Jobs’ seal of approval. All we all know, even now, that is perhaps the single biggest determining factor as to whether a device will see the light of day from Apple. Jobs apparently likes this new device so much, that he’s “cemented” into the company’s 2010 roadmap of products, AppleInsider says citing sources well-respected “for their striking accuracy in Apple’s internal affairs.”

And we shouldn’t have to wait a year or more for the device, the goal is Q1, according to the report. This indicated just a small slip from the Fall 2009 launch that we had initially been hearing.

So what other details are there? Well, the device will apparently have a 10-inch screen (slightly bigger than the 7 to 9 inch screen prototypes our sources had seen). It will also have built-in 3G wireless access. This is where things start to get really interesting, because there have long been rumors of Apple talking with Verizon about a device that was not the iPhone. Apple, of course, has an exclusive deal in the U.S. with AT&T for the iPhone through next year, but there have been no shortage of whispers in recent weeks that it’s not just us that is displeased with AT&T, but that Apple is as well. And Yesterday, AT&T CEO Randall Stephenson made a comment indicating that the iPhone would not be AT&T exclusive forever, perhaps indicating that the end is near for the exclusivity of the partnership.

Another interesting partnership element is behind what will power this new device. It had long been assumed that Intel’s Atom chips would be used in such a device, but more recent reports have indicated that Apple has instead used its acquisition of chip-maker PA Semi last year to produce its own, custom-tailored chips. AppleInsider is indicating the same thing. These chips would supposedly handle the device’s power consumption better than the Atoms would.

One thing that’s not clear from this new report is what kind of operating system this device would run. AppleInsider’s own mockups (pictured above) indicate that it will run apps like the iPod touch and iPhone. This would seem to suggest a version of the iPhone OS, rather than Mac OS X. But who knows, that’s just a mockup. Certainly, a low-power chip would have an easier time running the iPhone OS. But this would change Apple’s idea of having developers develop for one form factor, something which gives the iPhone platform an advantage over other mobile devices.

Another question mark remains the price point. The report suggests it will be “expected to retail for somewhere between the cost of a high-end iPhone and Apple’s most affordable Mac notebook.” That means between $300 and $1,000. And given what Apple COO Tim Cook said the other day during Apple’s earnings call, you can probably rule out anything under $399 and $499 as well. So perhaps $699 or $799?

But one pricing wild-card that you must note will be the wireless carrier partnership. If there in fact is one, that could mean another subsidy which could drive down the price significantly. But would people be willing to pay a monthly fee for a device that isn’t a mobile phone? That seems unlikely in this market. So perhaps Apple will work out a deal with Verizon or another carrier similar to what Amazon has done for its Kindle device. That is, it will bake the cost of access into the cost of the product. The problem there is that while the Kindle uses very little wireless data to transfer books, an Apple tablet would presumably use a huge amount of data, for apps and Internet access.

That type of access is something which I doubt any carrier would be willing to provide without a huge (and I mean huge) chunk of change in return. This will be something to pay attention to over the next several months.