For many people, the web has fallen prey to information overload — from RSS readers to Email to social networks, we’ve all got vast amounts of data coming in at any given time, oftentimes to entirely different places. Many services have sprung up to try to tackle this problem, including FriendFeed, but most of them don’t even try to integrate Email. LifeIO is a new startup launching today in private beta that’s trying to do it all, with integration of Email, calendars, and your social networks. The first 100 TechCrunch readers to visit this link will be able to grab an invite.

lifeIO is meant to serve as a control panel for all of your communication, featuring tabs for Email, calendar, note taking, social sites, and RSS — in other words, a one-stop-shop where you can conduct the vast majority of your online activities. That’s a lot of personal information to store in one place, but fortunately everything is encrypted and transferred via a secure HTTPS connection. Features are broken into broad sections, like ‘Social’ and ‘Email’, which you can jump between using a slim menu bar at the top of the screen. The site does a good job keeping things consistent — navigation within a section is always done on the left side of the screen, with the content itself appearing in the middle (it works similarly to most desktop mail clients, like Outlook). Finally, the right portion of the screen is always dedicated to the lifeIO MyStream, which provides a real-time stream of new blog posts and notices as they come in. It can be a lot of content to absorb, but fortunately lifeIO lets you customize which items appear at a given time. 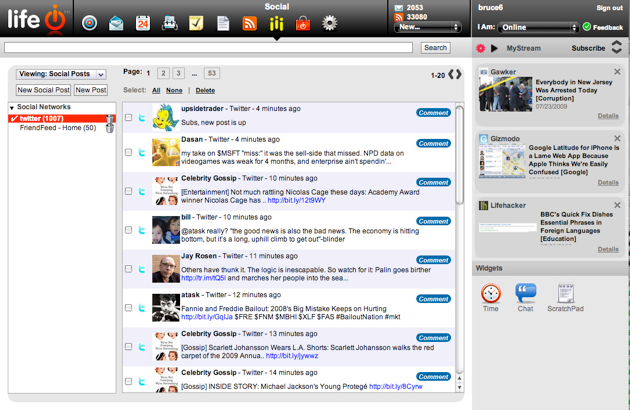 The ‘Social’ tab is reserved for services like Twitter, Facebook, and MySpace (the number of supported services is actually quite limited right now, but more are on the way). One possible workaround if you’re looking to import as many services as possible: simply import your FriendFeed RSS feed. This social information, along with your Email, makes the site’s search feature potentially very powerful. Other features include the ability to chat with your buddies on most common protocols, including AIM and MSN, and a ‘Shopping’ section that lets you persistently monitor search results for a certain product.

The site has some good ideas — I especially like the real-time stream of new content that shows as new blog posts are appearing from my RSS feeds. But there are definitely some usabililty issues to work out before the site launches to the public. For one, the site needs another layer of polish: feeds and search results appear as unnecessarily large boxes (these would be great if they included extra content, like images from the article they linked to, but they’re fairly empty). And navigation can become a bit confusing at times. And perhaps most important: the mail client still has a very long ways to go before it will be able to match Gmail’s interface, which is going to be key if the site is going to draw any hardcore users. All of that said, lifeIO is still in very early stages, and we can likely expect some major improvements in the future.

Disclosure: lifeIO was a sponsor at our August Capital party earlier this month. 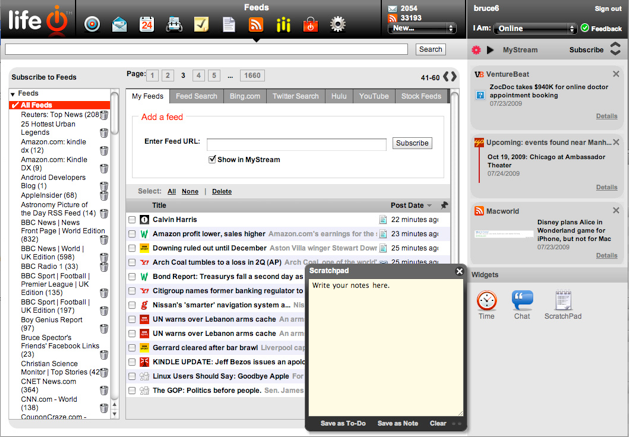