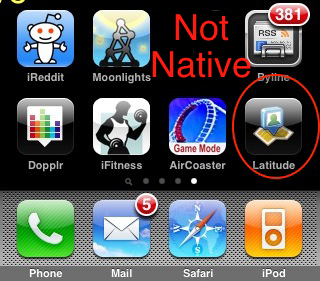 We briefly pointed this out in our longer post on Google Latitude launching on the iPhone, but it’s worth pointing this out separately. In its post today, Google made an unusual admission about its service: It apparently built a native Latitude app for the iPhone, but Apple asked it to make it a web app, so Google did that instead.

We worked closely with Apple to bring Latitude to the iPhone in a way Apple thought would be best for iPhone users. After we developed a Latitude application for the iPhone, Apple requested we release Latitude as a web application in order to avoid confusion with Maps on the iPhone, which uses Google to serve maps tiles.

Hmm. We all know that Apple and Google are pretty buddy-buddy, after all, Google CEO Eric Schmidt is on Apple board (though it’s not clear for how long). But something about this sounds a bit odd. Apple dictating product decisions to Google, and Google listening. There has been talk of this in the past as well. And perhaps now we know why it took Google so long to get the service on what is the most popular smartphone out there right now.

This is also a bit odd because if Apple is so worried about a confusion between Latitude and Maps, why not just build Latitude into Maps? Maybe that’s coming down the road?