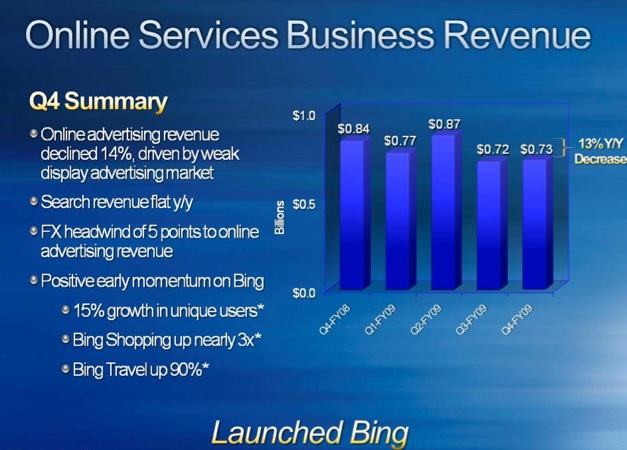 Microsoft just announced quarterly earnings and they are not pretty. Total revenues are down 17 percent to $13 billion, and net income is down 29 percent to $3 billion. Every business got hit hard, but the worst-performing business by far was the online business. It had the biggest operating loss of $732 million, which was $1 million more than its revenues of $731 million.

That means that every dollar of online revenue was wiped out by a dollar of operating loss. And those operating losses really stack up. For its fiscal year (which ended in June), the online business showed an operating loss of $2.2 billion, nearly twice as much as the year before.

Despite the much-ballyhooed launch of Bing, search revenue was flat in the quarter was flat. You’ve got to wonder how much of the ballooning operating loss is going into Bing, and whether those investments will ever pan out.

The client business (Windows), isn’t doing so hot either. Revenues in the quarter were down 29 percent to $3.1 billion, and it made $1 billion less in operating profit. The Entertainment business (Xbox) saw quarterly revenues decline 25 percent, but managed to reduce operating loses to only $130 million. 1.2 million Xboxes were sold in the quarter, and each Xbox owner has now bought an average of 8.6 games. At least servers and Tools under Bob Muglia seems to be holding up. Its revenues of $3.5 billion were only down by $200 million and its operating profit of $1.3 billion was essentially flat. (Click on segment breakdown below to enlarge).