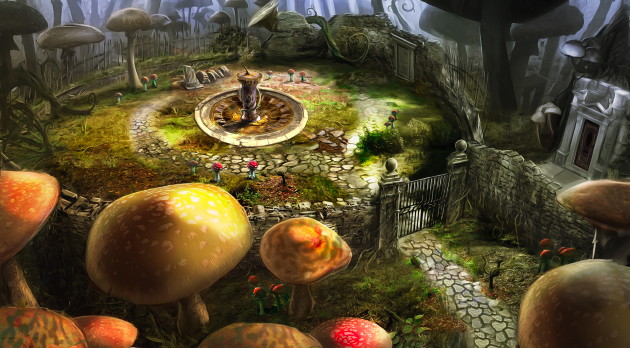 Disney Interactive Studios announced today that French dev Etranges Libellules has begun development of videogame adaptations of Lewis Carroll’s beloved Alice’s Adventures in Wonderland and Through the Looking Glass to complement Tim Burton’s upcoming film, Alice in Wonderland. The Wii, DS and PC title take place a few years after both stories in Underland and players must help Alice battle the Red Queen and Jabberwocky.

The Wii and PC titles will follow the storyline of Burton’s film while the DS version pits Alice against the Red Queen’s Army. All three titles are due out the same week as the film release. A “promo” app will be released this December with a full release for the iPhone, BlackBerry, Android and Java/Brew devices in February of 2010. 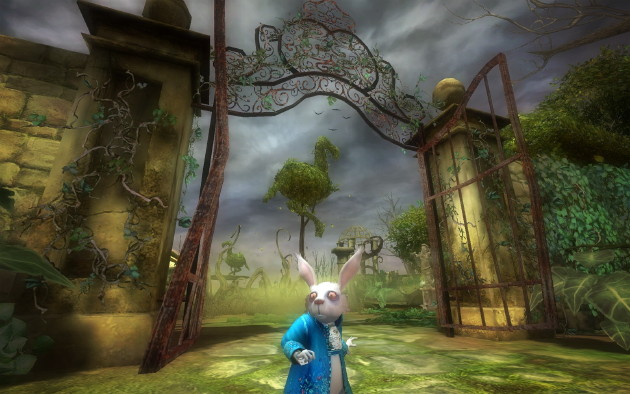 BURBANK, Calif. – (July 23, 2009) – As Tim Burton and Lewis Carroll fans become curiouser and curiouser (Carroll, 1865) about Walt Disney Pictures’ upcoming “Alice in Wonderland” film, Disney Interactive Studios today announced development of video game adaptations of the beloved story. The video games, inspired by Tim Burton’s highly anticipated film starring Johnny Depp, Anne Hathaway, Helena Bonham Carter and Mia Wasikowska as Alice, find Alice several years after the original “Alice’s Adventures in Wonderland” and “Through the Looking Glass” stories. Alice in Wonderland for Wii™, Nintendo DS™ and Windows-based PC takes players on a topsy-turvy and immersive journey in Underland as Alice finds herself in a world of illusion and magic where nothing is quite like it seems. Alongside her endearing friends –Mad Hatter, March Hare, Cheshire Cat and White Rabbit – players aid Alice to defeat the Red Queen and Jabberwocky. Alice in Wonderland mobile games will begin launching later this year.

“These games fully capture the magnificent and whimsical world of Underland while experiencing key moments from the film,” said Craig Relyea, senior vice president of global marketing, Disney Interactive Studios. “More than just a retelling of the movie, Alice in Wonderland introduces fans to an entirely new style of innovative gameplay designed to challenge the puzzle solving skills of older players while making the adventures accessible and enjoyable for the younger crowd. Innovative gameplay and distinct artistic styles on each platform gives players a range of unique and engaging experiences.”

Alice in Wonderland allows players to guide, protect and aid Alice as she journeys through the world of Underland while unraveling the game’s many twisted mysteries. Along the way, players call on a diverse and unique cast of characters such as the Mad Hatter and Cheshire Cat who each have unique abilities to help evade traps and solve challenging puzzles. The Mad Hatter can help Alice alter her perception of Underland and take advantage of optical illusions to open up places in the world the player alone would not have noticed. Meanwhile, the Cheshire Cat can use his ability to make himself and objects appear and disappear helping Alice through this strange world. Players must choose wisely when using each of the characters’ powers and combine the abilities to solve more complex puzzles.

The Wii and PC versions follow the film’s epic storyline and introduce new fiction and locations. With an upgradeable combat system, players collect “impossible ideas” to replay levels and unlock Underland’s secrets. Players must carefully select the supporting characters and their abilities to defeat the numerous enemies set forth by the Red Queen and her army of cards, destroy the Jabberwocky and restore Underland back into Wonderland.

The Nintendo DS version will introduce a new twist as players guide Alice alongside her diverse and enduring friends to combat the legions of the Red Queen’s Army. Creating their own path through Underland using an oracle, players lead, protect and help Alice on her quest. The DS version features an innovative art style unique to the platform, a playable character not seen on the home console version, and unique character abilities similar to those of the Wii and PC versions. DSi players will use the system’s camera to detect colors mapped to unlockable content when tasks are completed. Also included in the DS version is DGamer, the online community exclusive to Disney gamers on Nintendo DS, allowing players to connect with others and unlock additional items in their DS game.

Developed by Etranges Libellules in France, Alice in Wonderland will be available for Wii, Nintendo DS and Windows-based PC with the same week as the film release in early 2010.

Disney Interactive Studios will also release iPhone and iTouch applications for the franchise. A promo application will release in December, 2009 with the full game releasing next year. Alice in Wonderland: The Mobile Game will take you on an upside-down, inside-out adventure on your phone. The whole world is a puzzle and players must twist and turn their iPhone to have Alice make it through Wonderland safely. Also available on Java/Brew, Android and RIM February 2010.