It’s clear that online gaming is quickly becoming much more social, with companies like Zynga reportedly bringing in nine figures and the casual gaming market continuing to skyrocket. But there’s still one major problem that’s holding everything back: it’s often impossible to monitor which games your friends are playing and when, especially when they’re playing on entirely different platforms. Today Raptr, the social network built around gaming, is releasing a multi-protocol chat client that’s looking to solve this problem.

The new client is based on AIR (which means it will run on Mac and PC) and integrates support for all major chat protocols, allowing gamers to keep in touch with their friends from a single app. Raptr isn’t anywhere near the first desktop multi-protocol chat client — I’ve been using Adium for Mac for years, and Windows has programs like Trillian available, both which support protocols like AIM, MSN, and Yahoo Messenger. But what Raptr can do that the others can’t is monitor whatever game you’re currently playing, be it a full-fledged PC game like StarCraft or one of the many casual games found on Facebook and MySpace. Overall, the service can recognize over 32,000 different games, including stand-alone Flash games that you’ll find embedded on countless sites across the web. Raptr’s client also includes support for some game-specific protocols, like Xbox Live.

This information is broadcast to your friends as your current away message/status (something like “Jason is playing Counter-Strike”), which is visible to anyone using a standard IM chat client. But the service is even more powerful if your friends are also using the Raptr client, as you’ll have the ability to automatically join whatever game they’re playing with one click, with the application handling all the relevant server settings.

Interestingly, the new application means that Raptr is competing to some degree against Xfire, the company that Raptr founder Dennis Fong co-founded and later sold to Viacom. Xfire also offers a chat service for gamers, but Fong says that Xfire is geared more towards hardcore gamers, and doesn’t offer support for other IM protocols or the ability to detect browser based games, like those that might be played on Facebook.

Alongside the new chat client, Raptr is launching a ‘Game Manager’, which brings much of the service’s social network functionality to the desktop. Using the manager, you’ll be able to access your Raptr profile, view the achievements of other players, and see which games have been recommended to you based on your past preferences. There’s also a listing of all of the games installed on your desktop (you can update them directly from the Game Manager), and a library of popular Flash games that Raptr has included with the software bundle. 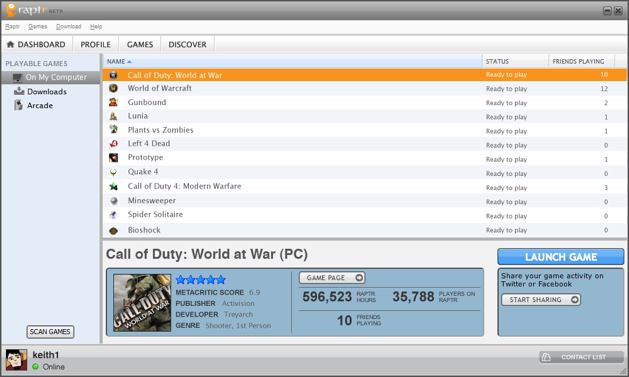 Raptr can expect the new products to be adopted quickly, primarily because the service is now being heavily promoted in many popular PC games. Raptr has scored some major deals with game publishers, including Activision/Blizzard, THQ, Sony Online Entertainment (SOE), NHN USA, Gamescampus, and Gala-Net. These publishers are behind some of the world’s most popular video games (Blizzard is behind a little game called World of Warcraft, along with a slew of other very highly regarded titles, and SOE made the reknowned EverQuest series).

So why are publishers so eager to integrate the service? Raptr adds a viral channel to gaming that has not previously existed before — when I go to play World of Warcraft, all of my friends know that I’m playing, which may prompt them to start playing as well. And in an age when paying for and installing a PC game can be done without leaving your desk through services like Steam, the ability for a game to go viral becomes even more powerful. It’s a symbiotic relationship, and it puts Raptr in a very good position.