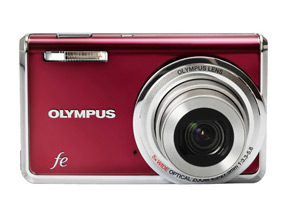 I’ve made no secret of my abhorrence of camera companies releasing their stuff at midnight eastern time without letting us know, but behold my revenge! I’m only writing up one of the four cameras Olympus released just a little while ago. (Maniacal laughter)

So I’m going to make this simple. Olympus is releasing four cameras, which share many characteristics. The one you want is, in this case, the one in the middle. The $160 FE-5020 has all the benefits of the more expensive $200 one, minus the 7x zoom (the 5020 has a 3x, but for under $200 you shouldn’t ask for more) and some minor features.

When you have a group of similar products (I always use this philosophy with video cards), it pays to go to the middle, since that’s where function and value intersect. However, if you’re hell-bent on getting another of these Olympi, head over to Demystifying Digital, which has more info on the others.