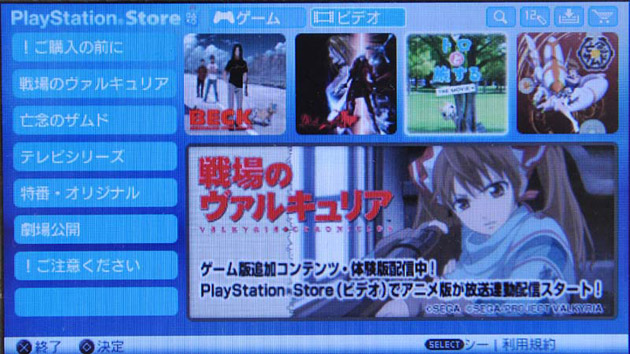 This machine translation is a little rough, but I think a PSP/PSN Store just launched (or re-launched, depending on your point of view) in Japan. Gamers there can buy, with actual yen (and not “Space Bucks” that you need on Xbox Live), all sorts of videos. I spy music videos and anime.

Videos can be rented—you’re given 72 hours to watch the video—while all movies can be viewed and transferred on any authorized device. So if you’re one of the few dozen people who own both a PSP and a PS3, then you’re free to send files to and fro’ as you see fit.

I understand anime has a rabid following here in the U.S.—weren’t anime fans largely responsible for the adoption and proliferation of the MKV file format?—but if Sony were to launch (or re-launch) a store like that here in the U.S., you gotta figure it’d need content with just s bit more mass appeal. I don’t know, all those movies that top the box office week after week even though they’re utter dreck.