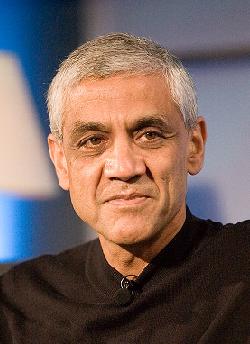 Forbes has a story today that Vinod Khosla is closing on $1 billion in new venture funds, $250 million for seed stage deals and $750 million for larger deals. There’s concern that these larger deals will largely go towards bailing out Khosla’s investments from the last fund that are struggling.

That’s highly unorthodox in venture capital circles– VCs usually reserve at least half of their fund for follow on investments because new LPs frown on their money bailing out deals that didn’t work the first time around. Khosla got around this by proposing a review committee for any follow on investments done out of the new fund. But there’s a better reason Khosla’s LPs shouldn’t worry: This is Vinod Khosla we’re talking about.

I don’t say that because he’s Vinod Khosla. I’m a big believer that picking winners in the 1990s, when information technology and the Internet were exploding with greenfield opportunties, doesn’t exactly make you a great investor today. Rather, as we’ve written before, it’s precisely Khosla’s willingness to be unorthodox that makes him such a good venture capitalist in these times.

In case you’ve missed it– the industry is in serious danger of 10-year returns dipping below the S&P 500 once stellar returns from 1999 and early 2000 fall off. What do most industries do when they’re under that kind of threat? Play it safe and hope they do just well enough to slip under the radar. Good deals are almost never made out of survival mode, especially in a business like venture capital where it’s the insane homeruns not the basehits that repay your investors. Simply put: Too many VCs are investing like they have too much to lose.

Khosla invests like a guy who has nothing to lose. Khosla runs his own firm so he doesn’t have to kowtow to partners, and he already donates 100% of his general partner profits to charity. So he’s not working for someone else, and he’s certainly not playing for money. What does still motivate him? Maybe it’s ego, maybe it’s legacy or maybe it’s just the intellectual thrill of proving he can still build another Sun Microsystems or Juniper Networks. But each of those things incents him to take huge risks.

As a result Khosla is one of the few people in the hightech foodchain that is unabashedly investing in unproven science. Big companies certainly aren’t. Even in the biotech space, big pharmaceutical companies mostly snap up smaller companies’ research on the cheap and usually only for drugs that can become huge blockbusters. The government has greatly curtailed research for the sake of research, although Barack Obama has talked a good game about getting that going again. And in the board rooms of Sand Hill Road, nothing can kill a partner’s deal faster than calling it “a science project.”

So what does that mean for Khosla Ventures? It’ll have spectacular flame outs, particularly amid the 30-or-so risky cleantech deals. But those flame outs will get it closer to finding a scientific breakthrough that does work. And in the venture business, it only takes one big home run to make everyone rich.