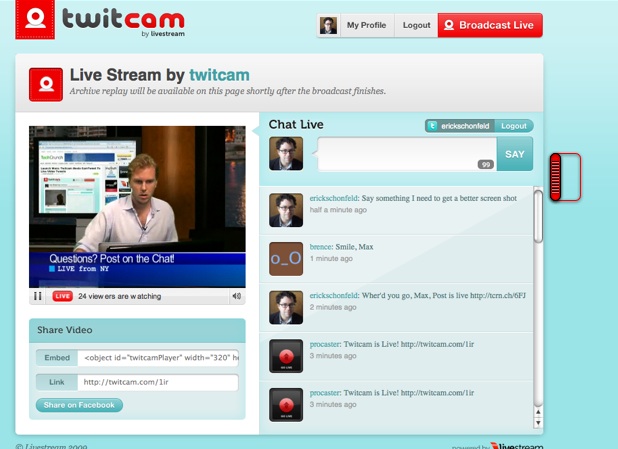 Ten days ago at our Real Time Stream CrunchUp, Justin.tv demonstrated a new beta product they are working on called CamTweet. It lets you launch a live video broadcast using your computer Webcam, Tweet it out to your followers on Twitter with a link to help gather an audience, and then keep the viral Tweets going by letting the audience sign into a chat box with their Twitter accounts so that each comment gets Tweeted out to their followers with a link back to the video.

It is a really simple, but powerful idea. So simple, in fact, that one of Justin.TV’s competitors, Livestream CEO Max Haot (who was watching the demo from New York via UStream, another live Web video competitor) decided to create the exact same product using Livestream’s new, yet-to-be released APIs.

What he came up with is Twitcam, which is live now. You sign in with your Twitter account (not yet through OAuth, though, which is subpar), hit broadcast, and you are off to the races. Comments are all routed through Twitter as well. You might be able to catch Max doing a test livestream here.

While pulling in people from Twitter to watch your live video stream might help with the live video audience problem, but it doesn’t do anything to make the actual live video streams any better than before. There is still a quality/boredom problem when it comes to live video because live video is really hard. But there is nothing like a real audience to force people to pick up their game.

What this proves is that no Twitter-related idea can remain uncopied for long. Twitcam launched before CamTweet even went into private beta. (Justin.TV is getting ready to release private beta invites later today—stay tuned). There are simply no barriers to entry for any Twitter app. And first-mover advantages are fleeting (see TinyURL Vs. Bit.ly). Better hurry up there, Justin.TV.

Update: Justin.TV has just thrown the switch for CamTweet, which you can try out here. Compare and contrast.