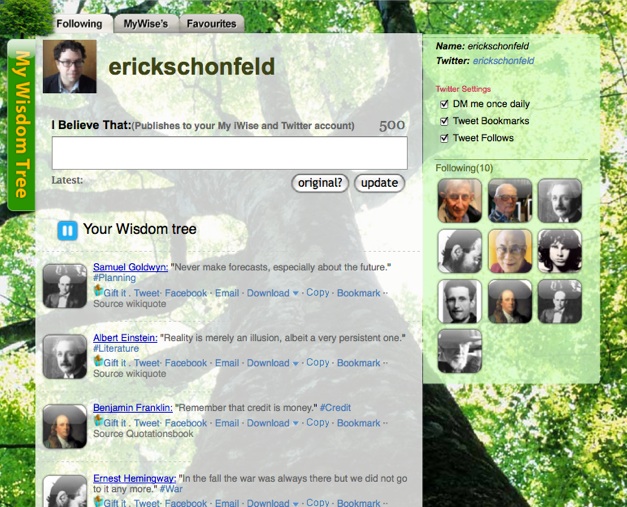 At first glance, iWise is “Twitter for dead people,” says founder and CEO Edo Segal. You can find nuggets of wisdom from famous people about anything—love, change, happiness, truth. Then you can follow those people in your own “Wisdom Tree,” which is a feed of quotes from the people you follow. In my Wisdom Tree, for instance, I’m following Benjamin Franklin, George Orwell, Ernest Hemingway, the Dalai Lama, and Jim Morrison.

There is some integration with Twitter itself in that you can sign in using your Twitter account and Tweet out any particularly good quotes you want to share. When you search for a quote about a particular topic, iWise shows you results both from the quotes it indexes off the Web and Twitter. The results are presented in a flowing real-time stream, to give them a feeling of immediacy. You can also receive quotes in your Twitter feed once a day, but only as a private direct message. And there is even a free iPhone app (iTunes link), designed to give you a little bit of wisdom every day.

The Twitter-like experience is designed as an entry point for the service, but Segal has much bigger ambitions for iWise. The mission statement is a slight tweak on Google’s: “To organize the world’s wisdom and make it universally accessible.” Segal was the founder of Relegence, a real-time search engine which he sold to AOL a few years ago (and he was on our real time search panel at our CrunchUp a couple weeks ago). He now runs Futurity Ventures, and iWise is one of the first projects to come out of it.

Underlying iWise is a semantic search engine which makes it easy to find quotes on any topic. It searches Wikiquote and other sources, and organizes quotes by author and topic. Every search also generates a Twitter feed on the same topic, so you can compare the wisdom of the past with the, um, wisdom of the present.
Wisdom is acquired over several lifetimes,” says Segal, which is why he created iWise to make wisdom more accessible. Each quote links to its own URL on iWise, where related wisdom/quotes can be explored. When you Tweet out a quote, the iWise short link takes people back to this page. (You can also order coffee mugs and mouse pads with any quote printed on it via Zazzle).

iWise members can also create their own pearls of wisdom, and check to see if it is truly original. If it is, then you get your own iWise page for that quote with a timestamp for when you came up with it. You can Tweet this out to your friends as well. I came up with “Truthfullness helps prevent toothlessness.”

A quote is a dense form of information, which can lead to other deeper types of exploration. Segal sees the passing and discovery of quotes as a form of micro-education, and famous quotes is just a starting point for him. He truly wants to organize all wisdom on the web. He’s opened up an API to his semantic search engine which other developers can use to add some wisdom to their services.