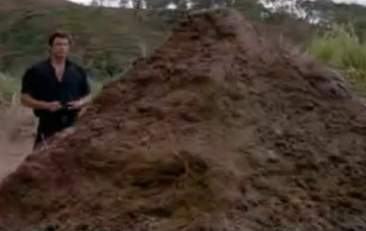 When Om Malik of GigaOM said he was breaking up with his iPhone 5 months ago because of the failures of AT&T, I must admit, I thought he was overreacting. I was wrong.

Since I switched to AT&T from Verizon just over 2 years ago to get the iPhone (which, of course, AT&T has exclusively in the U.S.), there have been no shortage of shortcomings by AT&T. But as of late, I’ve been noticing things getting much, much worse. And I’m hardly the only one. And so it’s time to call out AT&T on those failures. And plead with Apple not to renew its exclusive contract with AT&T when it expires next year.

In my mind, the most recent AT&T failure is completely inexcusable. Its visual voicemail system — which is the only way to be notified of voicemails on the iPhone — has been down for many users for days, if not weeks. And AT&T apparently didn’t bother to tell anyone. What does this mean? Thousands, or hundreds of thousands or maybe even millions of missed connections, that could be vital for personal lives, business and a host of other things. I’m simply dumbfounded by the failure.

Here’s how I found out about it. While I was coming home from the office yesterday, I all of a sudden got bombarded by visual voicemails. It was only then that I realized that I had not received one in a while. How long? Since sometime before July 3, apparently. Yes, 2 weeks without a single voicemail.

Even better is that not only did I get bombarded by these weeks old voicemails at once, but I still cannot listen to them. It has been over a day since the notifications finally came in, and visual voicemail is still down. I’ve had to manually call the AT&T voicemail service — not a huge deal, except that I’ve never done it before, so I didn’t know how, and that I didn’t receive any kind of notice that I had to do that.

Once I did that, sure enough, I had a a range of voicemails from personal ones, to pretty important ones for appointments and work that I just totally missed, to a voicemail from my 90-year-old grandma, who probably thinks I’m avoiding her now. I’m not grandma, AT&T just is a complete and utter failure.

Oh, and did I mention that half of those missed voicemails don’t even show up in my call logs as missed calls? So who knows what else I’ve missed from people who didn’t bother to leave voicemails.

I’m so pissed off that I kind of want to call AT&T and demand that they call each of the people I missed calls from and personally apologize. Instead, I’m writing them this very public condemnation.

This is really, really bad any way you look at it. But it’s compounded by a host of other failures over the past several months and years on AT&T’s behalf.

Even since the iPhone launched on AT&T’s network, there have been reports of problems. But things really got bad with the launch of the iPhone 3G last year, when basically no one could activate their phones. Okay, so AT&T learned from that mistake, right? Nope — the same thing happened this year. And immediately after that post, AT&T contacted us to suggest that it wasn’t its fault, but when we asked for some sort of proof or statement to that effect, they did not get back to us. Yeah.

And let’s not forget the total failure of AT&T’s network during this year’s SXSW festival. AT&T tried to pat itself on the back for rushing to turn up the bandwidth — something which still didn’t really work all that well, and came far too late. Sure, there were a ton of iPhones in one place that were accessing the network, but AT&T has one job: To provide service to its customers, and it failed at it.

And it fails at it far too often. Depending on where you are here in Bay Area (I’m using that as an example because that’s where I live, but the problems are hardly confined to here), there is basically no AT&T reception. This is what Malik noticed all those months ago. And as more iPhones are being sold, it’s getting progressively worse.

AT&T promises that network upgrades are coming, but the fact is, the company has had over 2 years to fix these issues (that have arisen since the launch of the iPhone) and they have not. Hell, they can’t even get basic services like MMS and tethering working, even as their carrier counterparts in other countries already have them up and running. And now you can add visual voicemail to the list. Pathetic.

And something else that’s not talked about nearly enough is that the newest iPhone, the 3GS, is built to handle data download rates twice that of older iPhones. But it doesn’t. Why? Because AT&T’s network isn’t yet equipped to handle it. And won’t be for most places until 2011. There will likely be two more versions of the iPhone by then.

And even where AT&T is testing the new faster network, in Chicago, there is apparently no data transfer speed difference, tests performed by Gizmodo have confirmed. Again, nice job AT&T.

As someone who writes about the iPhone a lot, I often get asked by people if I think they should get one now or wait to see if it ever gets on another carrier. That answer becomes easier everyday: If you can, wait.

As great as the iPhone is as a mobile computing device, it is still first and foremost a phone. But with AT&T’s shortcomings, it has basically turned the iPhone into an iPod touch. So why not just buy one of those? After all, you can get much of the actual working functionality, without having to pay a high monthly bill.

AT&T’s exclusive deal with Apple is set to expire next year, and they’re trying to extend it right now. I will say right now that if Apple does re-up with AT&T it will easily be one of the most disappointing things it has ever done. And I think ultimately that would prove to be a huge blunder from a business perspective.

I understand why Apple went exclusively with AT&T at first (though it had first offered the device to Verizon, which turned it down) — it got a pretty sweet deal, and was able to use it to put it in a position of power over the entire industry. And I even understand why they re-upped the first time — to get an even sweeter deal (the subsidy from AT&T for each phone sold). But now AT&T is a liability for Apple that will inhibit its huge potential for growth in the U.S.

Apple no longer needs AT&T. Thanks to its huge success, it can dictate its own terms to other carriers now, and ensure it controls the iPhone ecosystem — its top priority. Verizon, as the nation’s largest carrier, is likely to give it the most resistance. But that resistance is futile. The iPhone will eventually be on Verizon, on Apple’s terms. It’s just a question of when.

If that’s by the end of next year, many of us will be happy campers. I don’t care what I have to pay to break an AT&T contract, I will do so in a heartbeat.

If it’s not next year, will I consider switching carriers and getting another phone? Yes. As I indicated, I’d be happy carrying around an iPod touch and having some other phone — even a crappy one — that actually works. Or more likely, I’ll just unlock the iPhone and use it on another carrier. At this point, I don’t care how much that costs, I just want a working phone.

But I don’t think I’ll have to do that. Because I truly believe that Apple has to know that it needs to expand its carrier roster in the U.S. to continue growth. And if I were a betting man, I would bet on that happening next year.

Let’s all do what we can to ensure that happens — to ensure Apple gets the message. Every time there is one of these ridiculous AT&T failures, tweet about it, blog about it, write Apple about it, or scream about it. Do whatever you can, but don’t just sit there and take it any more.

It’s time to send a message, since AT&T can’t provide us with ours with any sort of reliability.

Update: The plot thickens (gets worse for AT&T)… From Molly Wood on Twitter:

AT&T CS told me today there’s been a 3G outage in CA for DAYS. Shouldn’t I get a “free text” about THAT?

Yes, I think we all should have. 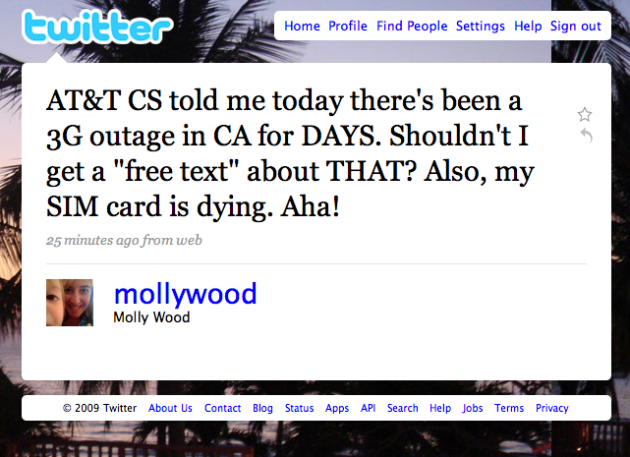 Update 2: AT&T has written me expressing their concern over the problems and the overall reaction to this story. They say they are looking into the reports of issues and are going over the tweets/comments. On the widespread CA 3G outage mentioned above, my contact says that he, “checked with network officials in SF and nationally and we know of no 3G issues like that mentioned in the tweet.” That seems to suggest that customer service and AT&T proper aren’t on the same page — something which is absolutely no surprise.

And naturally, reports of issues are still rolling in. Here are two that highlight the problem from both a personal life and business life perspective: 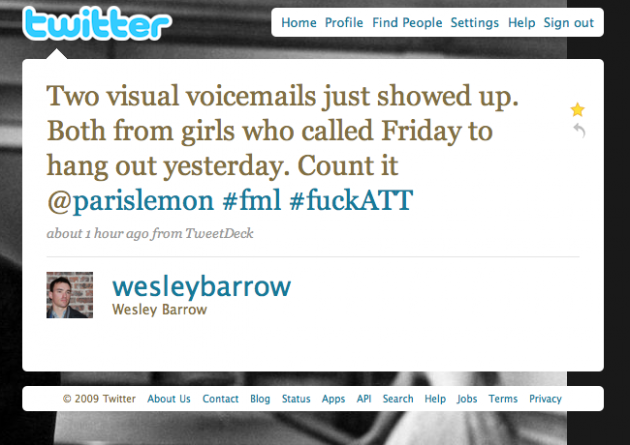 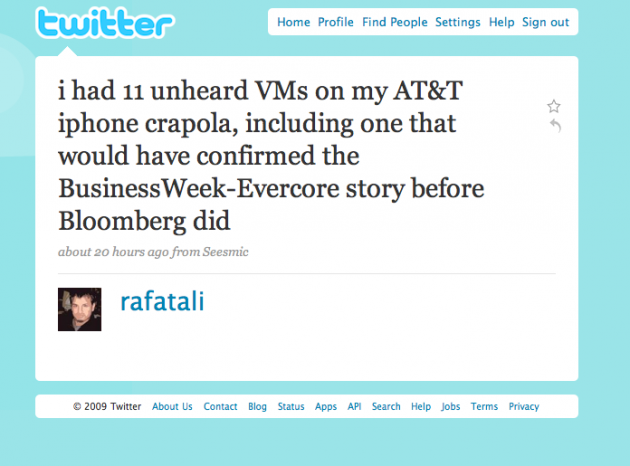