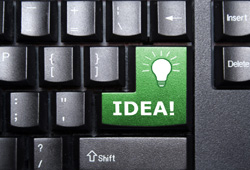 There’s a cliché statement about entrepreneurship that says ideas are nothing without execution, rendering the former virtually worthless without the combination of hard work and luck that can transform unmaterialized concepts into viable businesses. Some have described ideas to be a mere multiplier of execution, which is close to how I personally think about them, and I would add that the process of getting a great product out there is a vital part of what constitutes innovation in the first place.

In my view, it’s not that ideas are worthless per se, it’s that they’re never more than a starting point, a launchpad.

I’ve been thinking about this all day after I read this blog post by Marjolein Hoekstra (who I consider to be a friend) about the original idea for Tweetmeme, a service that aggregates the most discussed and retweeted stories on Twitter (we use their retweet button at the bottom of blog posts, and you should use it).

I won’t dive deep into the details of the story because I’m trying to make a larger point, but here’s the gist: Hoekstra feels she doesn’t get enough credit publicly about the original idea for Tweetmeme, and calls out the company’s founder Nick Halstead for acknowledging her role and suggest perhaps they should even consider writing her a check. According to her, Halstead has been open about her role in Tweetmeme’s early days but has stopped doing that ever since they’ve raised about $650,000 in seed financing for taking the service to the next level. Halstead’s side of the story boils down to the fact that she was very involved in the (not so great) first version of the product, but they let it languish for 8 months and finally refocused and turned it into a great service without her help.

I tend to lean towards Halstead’s view on all this, despite my respect for Marjolein and knowing how knowledgeable she is about the Web and Twitter in particular. The way I see it, Tweetmeme is what it is in part of what Hoekstra talked about with Halstead et al. in the early days, through direct messages on Twitter and conversations on Skype. But it was a fairly obvious idea in the first place, and there were already others competing for the title “Techmeme for Twitter stories” when it first came out.

I’ve been in similar situations myself, having discussed business ideas with people online or offline and seeing them start a company, add a certain feature or rethink their strategy after these conversations (not that I’m saying I’m always right, quite the contrary). Sometimes I get credited, sometimes I don’t. But usually it’s not something I care much about, because I realize ideas are essentially a dime a dozen and there’s little chance that these people wouldn’t have made these moves without my help. Furthermore, most of the time it pleases me to see something happen because of something I told someone, whether it gets publicly credited or not.

I understand Hoekstra’s sentiment, but in general, I also think if your role is that significant from the get-go you should become a partner or somehow try to get compensated for your work early on. Complaining about not getting enough credit this late in the game comes off as envy rather than a call for sympathy, even if I know in Hoekstra’s case it’s most certainly the latter. To her credit, she blogs she just wants to get stuff settled between them and then move on.

Question is: what should one expect for helping shape an idea that turned into a business after many meetings, a lot of trial and error and some risk taking which did not involve her?