Google made its earnings numbers yesterday, actually coming in above expectations.  Total revenues were $5.5 billion, 3 percent above the same period last year and flat with the first quarter (when sequential revenues actually declined).  Net revenues, which are the revenues which actually go to Google after they pay off AdSense and AdWords partner sites via traffic acquisition costs (TAC), came in at $4.07 billion.  That was slightly above the Street consensus of $4.05 billion (see Citi’s cheat sheet below).  Non-GAAP earnings came in at a respectable $5.36 earnings per share, well above the $5.05 Street consensus.

Investors should be ecstatic, right?  Yet the stock is down $15 right now from yesterday’s close, to about $428. Some of that is selling on the news that advertising revenues have “stabilized.” But if you take a deeper look at the numbers, it looks like Google’s earnings strength has more to do with cost-cutting than with revenue growth.

Google ended the quarter with 378 fewer employees than in March, 2009 (total headcount was 19,786). Some of those might have included the 200 sales jobs it announced it would cut at the tail end of the first quarter. Google was able to reduce its sales and marketing costs by 3 percent and of its general and administrative costs by 23 percent from last year. The latter translated into $110 million in savings.  All of this cost containment certainly helped operating income rise 19 percent (to $1.9 billion), when net revenues were flat.

Google also put a major squeeze on capital expenditures, which came in at $139 million (80 percent lower than a year ago).  That helped free cash flow increase 37.5 percent to $1.5 billion from a year ago, but that was still down $517 million from the first quarter.  And when you back out the CapEx numbers the actual net cash coming from operations declined 9 percent to $1.6 billion. 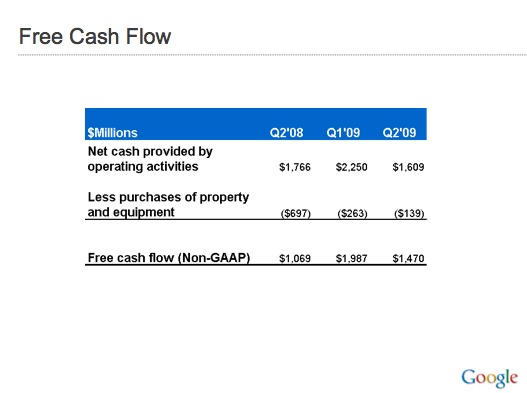 Paid clicks were up 15 percent year-over-year, but down 2 percent from the first quarter.

YouTube close to profitability: On the conference call, Google reported that monetized views on YouTube had tripled and that profitability for the service is in sight. 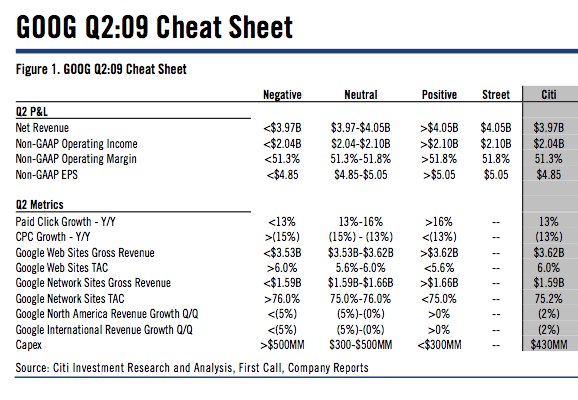