The “Favorite” is kind of like the unwanted step child feature of Twitter. Though it has been around since the early days of the service, they have never really done anything to promote its use.

One would assume you’re supposed to use it to start your favorite tweets, but I don’t use it like that, because what’s the point? Instead, I mostly use it to bookmark tweets that I want to find later. But a new service Favstar.fm hopes to take the Favorite functionality back to its roots, and make it useful.

While the fairly popular Favrd service has revolved around favorites for a while, it is basically only useful to show the most favorited tweets across the whole network on any given day. You can find individual user pages, but it’s not very obvious how to do that, and results only go back for a few weeks. Favstar.fm wants to be the all encompassing Twitter favorites destination.

The main page shows a recent leaderboard that can be set to show tweets of only a certain level (10 favorites, for example). If you sign in via Twitter OAuth, you get a whole range of functionality, including the ability to follow people from Favstar.fm and see what tweets your friends are favoriting.

Because it’s aiming to track favorites across the whole network for all time periods, Favstar works a little slower than Favrd does, developer Tim Haines tells us. But it seems like a fair trade-off to get all this data. And if you want your data quicker, Favstar.fm prioritizes those users who sign in via Twitter OAuth. 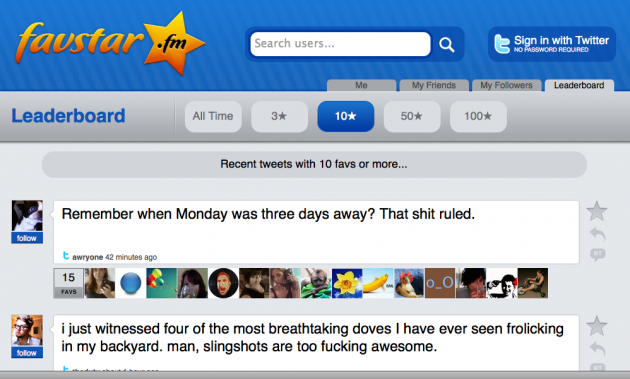