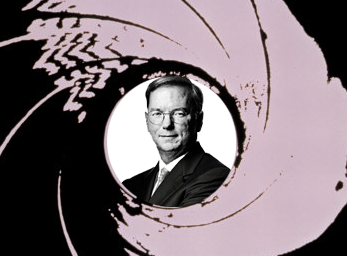 This morning I woke up and saw an interesting headline on Techmeme from Forbes writer Brian Caulfield: Why Google Is Stealing Apple’s Ideas. Wow, a story involving two of the world’s largest technology companies and scandal? This was going to be good.

And then I read the story, which turned out to be a strange hit job on Google for no apparent reason, trying to imply that Google has somehow bypassed Apple’s “renowned secrecy” and used its ideas to foster the development of its new Chrome OS. And somehow, Google CEO Eric Schmidt is behind it.

Caulfield claims that Apple may have “missed a spot” by letting Schmidt stay on Apple’s board. First off, why does everyone seem to assume that Apple isn’t well aware of the fact that Eric Schmidt is the CEO of Google?  To paraphrase John Gruber, does anyone actually think Steve Jobs is too shy to confront Schmidt? Of course, Caulfield immediately goes on to say that Schmidt isn’t actually a spy, but rather that somewhere along the line Apple and Google have become “accidental competitiors” who have simply yet to realize it. Right.

But the Schmidt point can be forgiven. It’s possible, however improbable, that Eric Schmidt has somehow been accidentally abusing his position at Apple to gain insider knowledge that he then leveraged to empower Google, all under Jobs’ nose, and without realizing that he was competing with Apple. After all, he is a very smart man.

So on to the points where Google has apparently copied Apple, which range from the silly to utterly ridiculous.

Caulfield points out that Chrome OS runs on x86 and ARM processors and is based on Unix. But look: Apple’s OS X also runs on both x86 and ARM processors, is based on a Unix variant, and NeXT Step (which laid the ground work for OS X) was used to build the web. Frankly I have no idea what that last point is even relevant to (maybe that Chrome is optimized for browsing the web?). Moving on, OS X is built to run on a wide range of devices, including the iPhone, servers, and Mac PCs. Clearly, Chrome’s planned support for both netbooks and eventually desktops is entirely derivative of Apple’s idea to allow an operating system to perform on multiple products.

Caulfield fails to point out the major obvious differences between the two operating systems. For one, Chrome OS will probably be entirely browser driven — many of the details are still speculative, but it’s likely that Chrome PCs will boot directly into the browser, with a boot time ranging in the single digit seconds. Applications will all be reliant on ‘the cloud’, rather than storing data locally. In contrast, Apple’s OS X is totally different. It’s not cloud based. It’s a full fledged OS that doesn’t boot into the browser. It seems that Caulfield honed in on just about every other obvious similarity while ignoring the mountains of differences.

Caulfield then gets into the similarities between the iPhone and Android. This is well-trodden territory, and Apple and Google are definitely competitors here. But trying to say Google stole the idea of a smartphone OS from Apple is strange — Apple and Google are taking very different approaches to their software (Google is free and used on devices from multiple vendors, Apple’s isn’t). And Apple wasn’t exactly the first company on the mobile block, though they did revolutionize the touchscreen. So, okay, we can see where Caulfield is going with this.

Apple launched a Web browser for the Windows operating system Safari in June of 2007. Google launched the Chrome Web browser for Windows in September 2008. Apple offers a full suite of office productivity software for the Mac. Google offers its own Web-based alternative, Google Docs. Apple has an e-mail service. So does Google.

Let’s just go through these one by one. Eric Schmidt was just quoted by the Financial Times as saying “[Google co-founders Larry Page and Sergey Brin] wanted to do this project since founding the company”. In other words, Google has been thinking about doing this for over a decade. But Google didn’t actually wind up releasing Chrome until well over a year after Safari hit Windows. Point Caulfield, I guess. Of course, by this logic, Apple was “stealing” that whole Windows browser thing from Microsoft to begin with.

Next up, Apple’s office productivity suite iWork vs. Google Docs. I don’t think anyone who has ever actually tried using both iWork and Google Docs would put them anywhere near the same ballpark. Google Docs is a cloud-based service that allows for easy collaboration. But it isn’t where you’re going to be doing any heavy document lifting — I can’t imagine writing anything longer than a few pages in it, not to mention create a media-heavy presentation. Yes, you can edit documents in both of them, but calling this a “stolen” idea is pretty ridiculous.

Finally, Apple’s Email service vs Gmail. This one is just laughable. When Gmail was released back in 2004, it revolutionized webmail, offering a full gigabyte of storage space to users (not to mention a great interface). Mail services at the time that had previously been restricted to a tiny fraction of that — in fact, Apple’s premium .Mac, which cost $100 a year, was only giving out a measly 15 megabytes of storage.

Even if all these points held water, Caulfield could have used nearly exactly the same argument trying to accuse Google of “stealing” from Microsoft . Microsoft has a browser too, as well as a tiny productivity suite called Office, and an Email service called Hotmail. You may have heard of them. Google isn’t stealing, it’s competing. It’s releasing new products in an effort to beat out its rival. Likewise, Apple is out to beat Microsoft as well, so the two sometimes wind up releasing similar products. If anything, this is a case of convergent evolution, not cloak and dagger espionage.