Now Microsoft is taking the beta off, and rolling out the full-fledged version of Silverlight 3 to the public. We had the opportunity to speak to Director of Microsoft’s Development Platform Group, Brian Goldfarb, about the new features of Silverlight 3 and the strategies behind the development of the new product. We also were able to talk to Scott Guthrie, vice president in the Microsoft’s Developer Division, on camera about his perspective on the significance of Silverlight 3 and its potential to takeover main competitor Adobe’s Flash (see video below). We’ve been able to compile a complete guide to SIlverlight 3 with all of its new features and the customers and developers who are using these features to launch innovative products. And Microsoft will also be demoing some of the real-time capabilities of Silverlight 3 at TechCrunch’s Real-Time Stream CrunchUp today.

Microsoft says that one of the main strategies that drove the development of Silverlight 3 was the focus on creating a technology and a set of efficient tools that bring design and development together in a rich media experience for the consumer that could be used across different platforms (browser and desktop) and across different browsers. Here are all of the new features of Silverlight 3, Expression Suite (a suite of tools for designers and developers), and the customers which are using the new product to enhance their media experiences.

1. Smooth Streaming: Microsoft says its new streaming feature improves the quality of streaming video on the browser so that it compares to watching video on television. Smooth Streaming on the backend is basically an encoding that lets you break the file up into smaller chunks that are easier to move and stream to an application. As a user, you’ll experience HD video playback of content if your bandwith is high. If a user’s bandwidth is below 3 Mbps, Smooth Streaming’s dynamic capabilities will kick in. Basically Silverlight is evaluating how much CPU and bandwith your computer and network has and makes dynamic calculations on the optimal place where the video should stream and acts accordingly, allowing for limited buffering. This streaming feature was used to stream Michael Jackson’s memorial service on MSN and to stream Wimbledon live on the web. 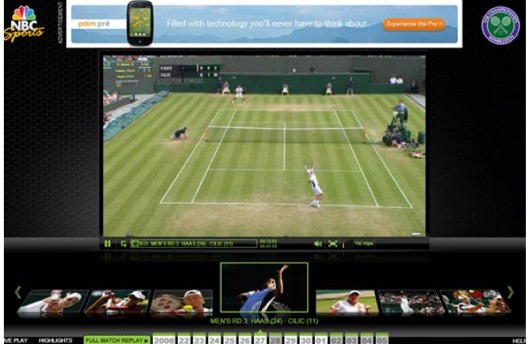 2. Digital Rights Management: Silverlight 3 comes with increased protection of content for businesses using the platform to stream or publish content. Studio and content owners have greater abilities to monitor and protect content from being distributed.

3. Immersive Experiences: Silverlight 3 comes with a few innovative capabilities for developers to harness, including th ability to have a deep zoom into images and an experience, almost making users feel like they are on a virtual ride. I demoed the deep zoom capability that’s currently being used on the Hard Rock Cafe’s site to portray music memorabilia in it’s different restaurants. Silverlight 3 also has a more powerful 3-D technology.

4. Out Of The Browser: Silverlight has been a browser based technology since its launch in 2007, but this ends with the new release. Microsoft has now given developers the ability to build applications on Silverlight that can be viewed in the browser and on the desktop. One of the potential apps that can be built off of Facebook was debuted by Microsoft at the social network’s technology tasting a few months ago, and we thought it was impressive.

6. The Push Towards Enterprise: Goldfarb says that Microsoft is making a a significant effort to show businesses that Silverlight can also be used internally to host and support rich media applications. For example, Continental Airlines is using Silverlight as the foundation for their call center application for employees who are taking reservations and supplying information.

Besides the examples mentioned above, Silverlight has been able to make some big deals in the live streaming space, including the Bejing Olympics, the Presidential Inauguration and for Netflix.Is Silverlight 3 a Flash-killer? Probably not, but Silverlight’s new features, especially its dynamic streaming capabilities (which Adobe has its own version of) and the innovative technologies that are being offered to developers and designers certainly may keep the product neck in neck with Flash.