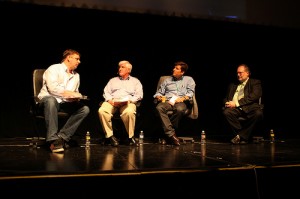 Today at our Real-Time Stream CrunchUp event in Redwood City, CA, Michael Arrington and Steve Gillmor are kicking off the show by talking with angel investors Ron Conway and John Borthwick about the opportunity for investment in real time.

Below find some live notes (paraphrased):

Note before: Conway invested in Google at a $75 million valuation.

Michael Arrington: What is real-time?

Ron Conway: I think it’s much bigger than Twitter. The fact that 10,000 app developers use the Twitter API is huge, but it’s a bigger opportunity for new content on the web. Real-time content hasn’t been available up until now, but it’s valuable. A whole new industry will pop up around it.

John Borthwick: It goes back to broadband, the “always-on” connection. And now that many people have these real-time connection, we’re seeing it grow. Also the openness of the platform is helping this trend. Shift occurred when Twitter bought Summize (which Borthwick invested in)

MA: How much stock did you get from that?

JB: Great question, we’re not disclosing. But there’s a collisions between real-time interactions and the liveness of an experience.

MA: I think Twitter search is still awful. Are we going to see improvements?

JB: I don’t view this as just being Twitter, it’s about the whole landscape. And I can’t speak for Twitter, but there is a whole bunch of innovation in the real-time search space. 4 years ago people would not have looked at this as an investment. But now it’s all open.

JB: Because those links are about the density of data, and it makes it easy to filter the stream. There is only going to be more demand to filter it.

MA: What are the big opportunities? 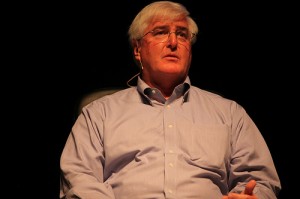 RC: I invest in great entrepreneurs first. We’re talking to every real-time data company out there. Then we invest in the idea second, and how much intellectual property they have. The new opportunity is how you can invest in this content now. It will blossom and monetization gets proven.

JB: We’re still very much learning. That tone is getting packaged now, but we’re not there yet. Web 2.0 had too many definitions, we don’t really have one here yet.

MA: Dumbest thing Twitter can do is add friction to the process, right? What about what the Sun Valley guys were saying this week?

RC: “Innovations is not happening in Sun Valley, it’s happening in Silicon Valley.” These guys all have to make sure that users like their service, and then monetization strategies will be obvious.

MA: And Twitter isn’t spending the money that Facebook is right? So they don’t have to worry as much.

JB: There’s a Silicon Valley centric way of thinking. Some great companies from England. New round in TweetDeck, unannounced round. TweetDeck is kicking all the competitors butts. Round was a couple million in dollars.

MA: Let’s talk about Bit.ly. I didn’t get it at first, but now I think I do, it’s kind of like Digg with data. Is Bit.ly the next company to sell to Twitter.

JB: Bit.ly was something my company Betaworks built. It turns one year old this weekend. We developed it to scratch an itch really. 27 or 28 million Bit.ly links are now being liked as of yesterday. That’s with the partnership with Twitter (it’s the default shortener). Lot of great data with Bit.ly, not sure what to do with all that yet, but we’re thinking about it. And we’ll push a lot of data through the API. We’re spending a lot of time scaling now.

SG: How does what you’re doing with Bit.ly going into what Ron is saying with monetization? 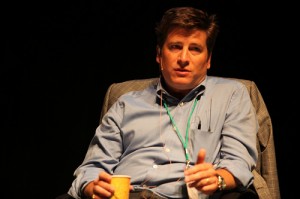 JB: Great question, it’s too early to tell. Maybe lead generation and analytics. I won’t answer the sell to Twitter because I don’t work for Twitter, and because I think the eco-system around Twitter is vibrant and it’s important it stay intact. If they sell, it won’t be an ecosystem.

MA: With API and Track, Twitter has some issues they need to deal with.

JB: I think the social relationships is. Social filters are so valuable too.

RC: It’s early days remember, social relationships, news, opinions, celebrities having direct contact with fans. Any entity to directly contact with their constituants. The Twitter app community is the development department of Twitter. All the apps being developed are outside, users decide what they like.

SG: Are Microsoft and Google going to get in on this? Other candidates for exits?

RC: Lot of exit opportunities. Lots of roll-ups, and lots of M&A. I think Google and all them will do their own things in this area as well. 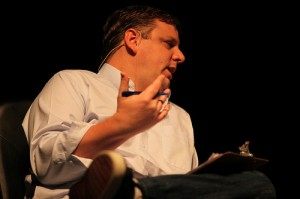 MA: Panel in Seattle was interesting. Companies were talking about making money, all of them said they buy traffic on Google. But that’s converting at a lower rate than links from Twitter. That’s Earth-shattering. But they can’t chare for that, right?

JB: The most compelling monetization models go with the user experience. You can’t slap on an existing one. It gives the users a poor experience. In the early days of Google they didn’t know how it would work. Some other companies are getting 20% of their traffic from the stream.

RC: This is about iterating and finding a monetization model.

SG: Question from audience. As data keeps coming in, how do you organize and filter it?

RC: A lot of these third-party apps are doing it. It’s a real dilemma, but they’re doing it.

JB: First filter is the social filter, then topical filters, then new filters which are emergies: retweets, @ replies, how many followers you have. A lot of this is related to the de-industrialization of the news. No one knew what Twitter would be good for, but then it was SXSW, then it was the news. 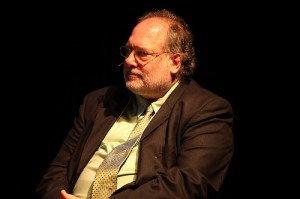 Q: Google was clearly not the first search engine, so what’s the opportunity to replace Twitter?

RC: It will be really hard, because Twitter has built a 5-letter word, brand.

MA: Twitter was weak for so long and we didn’t leave, so maybe they made it.

RC: It’s all about the brand. I bet it’s close to what Google’s brand was that the same point in its life.

JB: On the topic of Google. Twitter has search-like behavior of Google, but it’s about navigation of the data too, which is different.

Update: Here’s some video footage of the talk: