There has never been a better time to be a “fan” online. Whether it be via Facebook, MySpace, or even through fan-based social networks like TopFans, fandom on the web is taking off now that fans have more ways of expressing themselves. Just look at the recently deceased Michael Jackson, whose Facebook page now has close to 8 million fans, surpassing the fan count of Barack Obama’s Facebook page (6.4 million fans). SuperFan is a new way for people to express their loyalty and admiration for a show, movie, celeb, professional athlete or politician. SuperFan is a social gaming network where users build their network around who and what their fans of and compete with other fans to become the top fan.

Users of the network can become Fans of all their “Faves,” which include everything from ABC’s show Grey’s Anatomy to tennis star Roger Federer. Fans tag their Faves and can then use credits (via a virtual currency) to become the “SuperFan,” which gives them special privileges in controlling the favorite item or person’s profile. The network has enabled a bidding system to motivates fans to prove they are the number one fan. 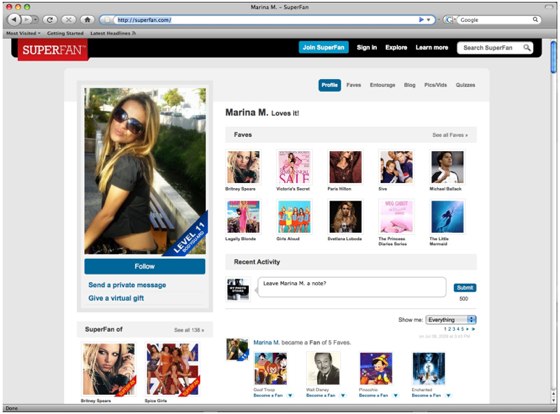 Fans can earn points as they contributing more to the site. The credits can then be used to send virtual gifts, posting site-wide messages, customizing profiles with skins and colors and becoming the ultimate “SuperFan.” Fans can also create, take and share quizzes about their Faves, create and post to blogs on their homepages, and create battles (posted to the community) between Faves to drive traffic to the their respective pages (think Angelina vs. Jen). Users are also given a compatibility score with other fans on the site, that recommends friends to you base on your mutual Faves.

SuperFan is the brainchild of the co-founder of Tickle (which was bought by Monster Worldwide for $100 million in 2004), Rick Marini. Marini says SuperFan will make money mainly through e-commerce (via virtual currency sales), advertising and afilliate campaigns (SuperFan has partnerships in place with iTunes, Amazon, TicketMaster, StubHub, ThumbPlay to sell products and tickets.) Board members include founder of F*cked Company and AdBrite Philip Kaplan and Napster founder Shawn Fanning.

SuperFan is a innovative and engaging way for users to express their “inner fan” but I worry about how site will amass actual users when many people are already using Facebook and MySpace as fan hubs. Marini says that the site has implemented integration with Twitter and Facebook Connect to allows users to publish news onto their other social network sites, and also possibly catch the attention of potential fans at the same time. Still, MySpace, especially when it comes to music, and Facebook have a relative monopoly when it comes to combining fans with social networks. But Marini counters that on Facebook anyone can create a fan page for a celeb, show, athlete etc, creating sometimes hundreds of pages for one person or item and distorting the ultimate fan experience. Users often don’t know which page is the official one. With SuperFan, all “Fave” pages are pre-set and monitored so fans cannot create new pages but only add to them.