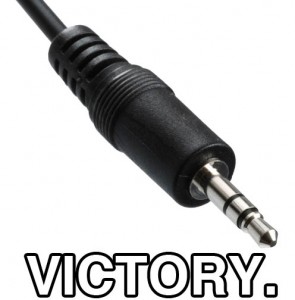 Dongles. In-line adapters. Proprietary headset ports. If it’s an audio port on a mobile handset and it’s not 3.5mm, it’s junk. As we declared back in May, we’re done with all of it. Now HTC, sire of the T-Mobile G1, myTouch, and countless other smartphones plagued by non-3.5mm jacks, is done with it too.

If you’ve been keeping up with your Android handset news, you might already know that the HTC Hero will be the first HTC-made Android handset with a 3.5mm jack. As it turns out, it’s just the first of many; beginning with the Hero, HTC is moving away from requiring users to pump audio through their modified miniUSB port.

We’d heard this mentioned as a possibility at past press events. This was HTC’s response when we reached out for comment:

The vast majority of devices we launch after Hero will have a 3.5mm jack. Devices that we have already announced but that still come out after Hero will not necessarily be a part of this change.

So it sounds like we may still see a few handsets hit the shelves with worthless audio ports – but aural salvation is on the way. This is a hugely important move for HTC and, seeing as they’re the most fruitful supporter of the platform so far, for Android. People like using their own headphones, but hate carrying around 2 extra inches of an oh-so-easy-to-lose adapter cable. If you make using headphones a pain, the media playback functionality of the handset/platform tends to be abandoned. Long live the 3.5mm port!