Image licensing network GumGum has raised $2.6 million in and extended Series A funding round led by GRP Venture Partners with First Round Capital participating. This brings GumGum’s total funding to close to $4 million.

GumGum has been seeing fast growth since its launch last year. Measured as an advertising network (but for images), GumGum became a Quantcast Top 100 site, reaching 13.7 million people in the U.S. and 23.5 million worldwide in February. Currently, GumGum reaches 29.8 million people in the U.S. and 50 million people worldwide, according to Quantcast’s lastest stats. More than 2,000 Web publishers license images through GumGum, which allows them to pay based on how many people see the image or use them for free with embedded advertising.

GumGum current clients include B5Media, gossip site DailyFill, Glam Media, MTV, TMZ, New York Post and Gawker. Sites contract directly with photo agencies, and GumGum keeps track of who is using what images and how many times they are viewed. That is what those Quantcast numbers are counting, thus GumGum acts like an ad network for images. GumGum’s founder Ophir Tanz says the new round of funding will be used to develop additional solutions around image licensing as well as drive new revenue opportunities to publishing partners. 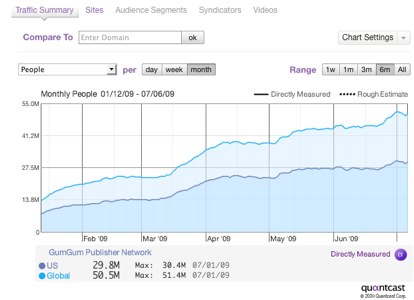