As we reported earlier today, media search engine Technorati has succumbed to the Twitter infatuation and is launching Twittorati, a site that shows what Technorati’s top 100 bloggers are tweeting about. Our earlier story indicates that the site is launching tomorrow but perhaps our post sped things up. We had a chance to demo the site with Technorati’s CEO Richard Jalichandra. The site pulls in the Tweets published by bloggers from Technorati’s list of Top 100 Blogs, which is determined by Technorati’s Authority Ranking (its equivalent to Google Page Rank). Authority Ranking is calculated via algorithm of inbound links from other blog posts, and weights those based on timing, relevancy and the inbound link’s site source Authority Ranking.

The blogs that are ranked vary by subject, with The Huffington Post taking the top spot, TechCrunch as no. 2 and Engadget in the no. 3. Twittorati pulls Tweets into a real-time stream (though not fully real-time; like Twitter, you still need to refresh the page to get real-time results) where you can organize Tweets by Authority Ranking or by latest Tweet. Because the Tweets are aggregated from blogs that cover a variety of subject relating to politics, technology, entertainment and more, the subjects of the Tweets are varied and somewhat random. But you can narrow your stream by filtering Tweets by Technorati Tags (life, news, music, politics, etc.) and the top trending Twitter hashtags. For example, some of the top Twitter hashtags that bloggers were Tweeting included #michaelphelps and #MJ. The origins of the Tweets include a blog’s Tweets and bloggers’ personal Tweets from their own accounts. Technorati says it has collected Twitter handles for most of the authors of the top 100 sites. 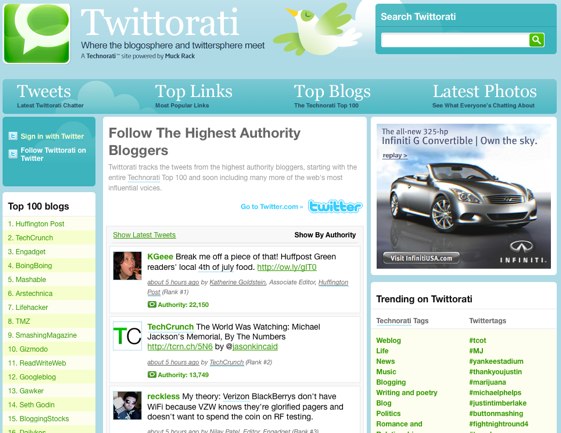 The site also shows the most popular links that bloggers link to as well as the most popular photos that are linked to. Both link and photo searches can be filtered by most recent links and images. And each day Twittorati pulls in a list of Tweets of featured bloggers that are profiled on the site.

The site itself can be useful when trying to peer into the professional and personal lives of bloggers. I think something that’s missing a breakdown of Tweets from blogs by topic. So for example, if you only wanted to see Tweets from bloggers at technology blogs, there’s no easy way to filter Tweets and blogs by subject. Jalichandra says Twittorati plans to add this functionality in the near future. The site is similar in theory to Federated Media’s ExecTweets, which is focused more on aggregating Tweets from execs in various industries vs. the blogger-focus on Twtterati. WeFollow is also similar, but isn’t limited to just blogs. Missing from the Twittorati are bloggers whose blogs may not make Technorati’s top 100 list, but whose Tweets are relevant and entertaining. Jalichandra says that the site will expand to include other prolific bloggers down the line.

Twittorati is being produced in partnership with Sawhorse Media, publisher of fellow Twitter aggregatorsMuckrack.com and VentureMaven. Luxury car manufacturer Infinity is sponsoring Twittorati. Technorati Media has been through a roller coaster of highs and lows over the past year. Last June, the company launched Technorati Media, a blog advertising network. Prior to launching the ad network, Technorati raised $7.3 million in a fourth round of financing through Draper Fisher Jurvetson, Mobius Venture Capital and FG Incubation. And last fall, Technorati acquired AdEngage to join the company’s newly formed blog advertising network. And most recently, Technorati launched a new directory of ‘tag’ pages, offering brief overviews of a variety of tech-related topics and redesigned BlogCritics, a blog network the company acquired.

Unfortunately, Technorati hasn’t been immune to layoffs during the current economic climate. In April, the company let go 10 percent of its staff, or 4 employees, and also suffered through an earlier round of layoffs last September and implemented pay cuts for remaining staff. Despite these setbacks, Jalichandra remains optimistic about the future of Technorati and the potential of Twitterati to be a popular destination to peek into the Twittersphere of the blogosphere. 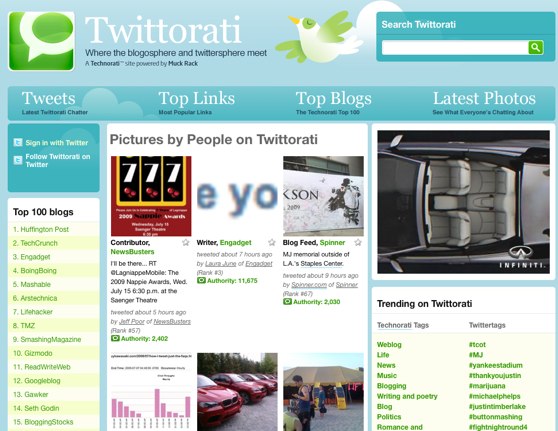