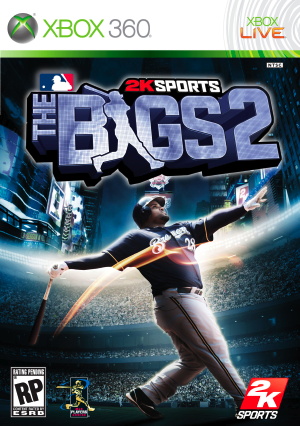 The Game: The Bigs 2 from 2K Sports

2K’s The Bigs 2 is a relatively easy game to pick up and play compared to more serious titles, like MLB 2K9 or MLB 09: The Show, but experienced Bigs “vets” will find a handful of new features to keep the experience of the Big Show challenging making the game worth picking up. If that’s not enough to sway you then check out the rest of the review. I triple dog dare you.

If you’re feeling confident with your pitcher and he’s painting all the corners then attack the opposing team’s big hitters early to shrink their “wheelhouse.” It’ll pay off in later innings when their sweet spot has gone from the size of a big rig down to a Mini or something like that.

Homerun Pinball was a big hit in the first title and it makes its triumphant return in The Bigs 2. It’s still a lot of fun and I’m glad they brought it back. 2K dropped a few additional all new mini-games and you’re confronted with Prince Fielder (the guy on the cover) in the Power mini-game, which is the jump off for the rest, including the Contact mini-game against Chipper Jones. I’m still working to unlock the rest.

You wanted a full 162-game season, right? Well, 2K listened and there’s a full season mode now. I could be wrong, but there’s no way of tracking “league leaders.” Who doesn’t want to know if they’re leading the league in homeruns? It’s a surprising omission to say the least.

Rounding out the improvements from the first Bigs title are the graphics. They’re improved, sure, but you might not notice it.

Can the AI in a game be that good? Maybe but not in The Bigs 2. Even in hard mode, the AI makes some unbelievable snags that are way too “legendary” or “great” for my tastes. It seemed like they had a couple outs every single inning.

League stats are a no show as I mentioned before. What’s up with that?

I don’t typically pay attention to game soundtracks, but someone must have been in an emo mood when they compiled the music for Bigs 2. Who listens to Daughtry or P.O.D.? Korn I can tolerate if I need to but Daughtry? I’d rather listen to nails on a chalkboard.

And what’s the deal with only letting me attempt one pickoff per inning? I can do it, Coach, I swear!

Squeeze plays don’t seem to register with 2K Sports. It’d be nice if I could lead off of third base. Just sayin’.

The “Power Blast” is still available, but there’s an added “Big Slam” feature that gives you four pitches to four batters (one each) giving you the chance to load the bases for a grand slam. Any contact with the ball results in a hit adding a skill oriented dimension to the game. But here’s why it’s in the “mixed bag” section. If you’re pitching against a “Big Slam” then you have no control over your pitcher in the final three pitches of the four-pitch sequence. I wouldn’t willingly give up a homerun or hit.

Big ups to Joe Ziemer for helping me out with this one.