Writing letters to elected officials and government organizations is a time-old part of political activism. More recently, citizens had the option of using email vs. snail mail to send out correspondence. Now, citizens will have the opportunity to send letters and messages to elected officials directly from Facebook. Bi-partisan Political and digital strategy firm Grassroots Enterprise has launched an technology, called “Actions,” that organizations can use on Facebook to allow supporters and visitors to send messages and letters to elected officials or other targets directly from Facebook.

The Actions tab on an organization’s Facebook page will let visitors immediately send letters to Federal or state officials and will automatically match them to federal and state legislative officials, based on the addresses they enter. One of the other important functions of Actions is its ability to capture names and emails in an external database for later emails and fundraising. Grassroots Enterprise says the beauty of the Actions offering is the ability to for users to interact with the technology without having to download a separate application. And the “Actions” page is customizable for individual pages, enabling organizations to feature their own actions for their specific causes.

One of the first Action tabs Grassroots launched was for the “Confirm Sotomayor” effort on Facebook. The organization reports that in the first two days, the Facebook page had over 2,000 action takers. Grassroots says that they are going to be unrolling Actions pages for a variety of Faceboook pages, including the Sierra Club’s page, and a “pro-hockey” effort in Canada that’s trying to create another professional team. 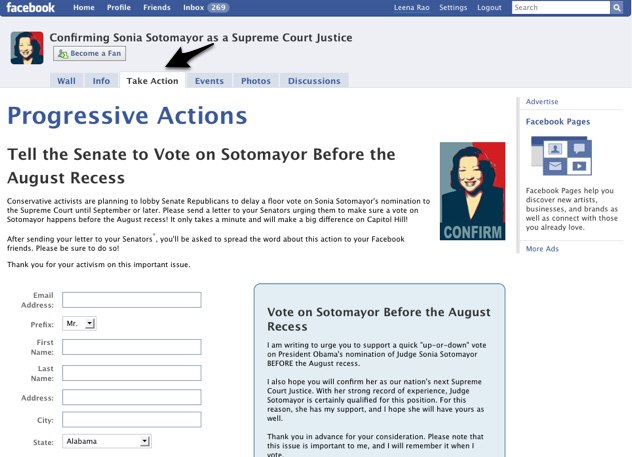 Actions is similar in theory to Causes, a popular Facebook application that lets users support and donate to non-profits, causes and individuals. But for now, Actions is focused on helping movements with correspondence to spur action and harvest emails. Investors of Grassroots Enterprise include Reid Hoffman, Peter Thiel and Keith Rabois.