Doorbell, the first product from Candian startup Smibs, is now commercially available after over a year of private and public beta testing. The service is “sales software for non-sales people” meant to help small businesses complete sales tasks without having to assign dedicated personnel to the role, and competes with other CRM services like Highrise.

The service has changed pretty significantly since we first covered it last June. The most obvious change is a complete UI redesign, which ditches the drab colors in favor of something much sleeker and more intuitive. Founder Peter Urban says that the site has a strong emphasis on using AJAX to decrease load times and increase efficiency, and has adopted more of a webtop control panel. The site has also added a new feature that allows you to ‘attach’ Emails to certain contacts by including a special Doorbell address in your mail client’s BCC field, and will be adding more social features, like the ability to monitor your contacts’ Twitter conversations, in the near future. 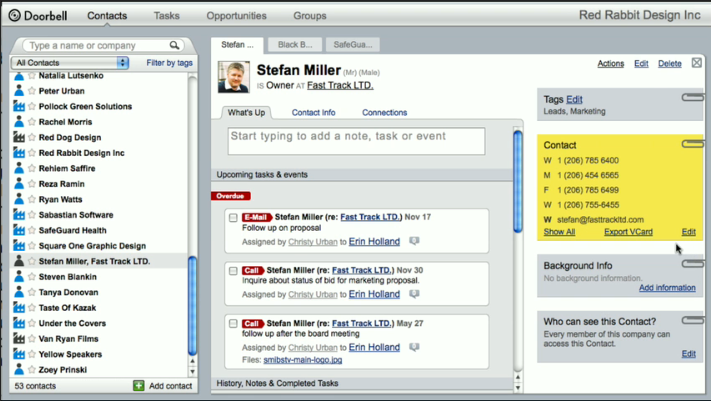 Anyone has been able to sign up for Doorbell for the last few months, but Urban says that it was still undergoing tweaking and was still in public beta. Now, the service is ready to make its full professional debut and drop the Beta tag (incidentally Google Apps did the same thing this morning — not bad company to be with). With the Beta tag gone, Smibs will also begin charging for the product, though it will offer it for free to teams of up to two users and 250 contacts. Paid plans start at $19 per month.

Doorbell isn’t the only Smibs product in the works: the company plans to have another application out this August, and we’ll also begin seeing third party applications appear on the Smibs platform in the next few months.