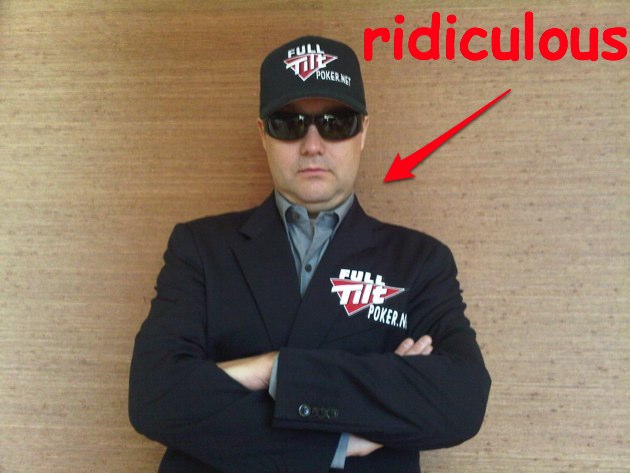 6,000 or so people have congregated at the Rio hotel in Las Vegas for this year’s World Series of Poker to fight for $50 million or so that will be split among the last 10% of players left standing. Among them are a number of tech startup entrepreneurs. We’re tracking four of them, plus any others that pop up.

This is David Sacks’ third WSOP. Sacks, a former PayPal exec and the CEO of Geni/Yammer, walked away with nothing two years ago. Last year he took home $25k in prize money, and twittered every hand. This year he’s way up after the first day, with $91k in chips. That likely puts him in the top 10% of players. He is twittering summaries of his play at @davidsacks. You can see his player card here with last year’s results.

Jason Calacanis (Mahalo founder) is playing today for the first time. He’s been sponsored by FullTiltPoker (they paid his $10k buy in) and looks absolutely ridiculous (he’s pictured above). Look for his twitters later this afternoon.

Facebook exec Chamath Palihapitiya is playing beginning today as well. And we’ve heard but haven’t verified that former Yahoo exec David Goldberg (currently CEO of SurveyMonkey) is at the WSOP too.

The tournament has just started so there isn’t much to report yet. One concern we have – Sacks is set to speak at our real time event this Friday, which is day three of the tournament. He told me today that if he makes it to day three he “has to play,” and won’t make the event. My response? It was NSFW.

Good luck to everyone. Except Sacks. I hope he loses it all on day 2.