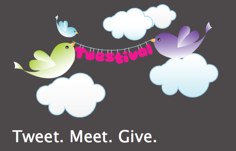 Twitter has been hailed as an incredibly useful marketing tool for businesses and brands, both big and small, to disseminate information and engage with consumers on a massive scale. But what about non-profits? The ability to use social media to fundraise for charitable purposes has been questionable. A few months ago, the Washington Post reported that Causes, one of Facebook’s popular applications used by non-profits to raise money, was not netting much money for charities, despite its large amount of users (according to the application’s page, it has 26 million monthly users).

Twitter, the current darling of the social media world, is increasingly being used by charities. In addition to building awareness, Twitter has potential to raise charitable contributions. One of the more successful initiatives launched in the Twittosphere was February’s global Twestival, which raised over $250,000 for charity:water, a non-profit organization devoted to bringing clean drinking water to developing nations. The volunteer-run organization held events to bring Twitter communities in nearly 200 cities together. 250K sounds like an awful lot of dough to raise over the microblogging network, but this amount fell way below Twestival’s goal of $1 million.

Still, Twitter’s viral, real-time nature allows for a fast (and relatively low-cost) way to raise funds. Tweetsgiving, another Twitter-based charitable initiative raised over $10,000 in just 48 hours in November of 2008 to fund a new classroom for a school in Tanzania. Beth Kantor reports that she was able to raise over $3000 via Twitter in just 90 minutes.

Other charities have used guerrilla follower tactics, developing ‘follower-challenges’ to raise money for causes. For example, Lance Armstrong’s Livestrong Foundation recently found a donor who was willing to give $25,000 if the Foundation’s CEO, Doug Ulman, could reach 25,000 followers in three days (he started with roughly 10,000 followers at the beginning of the challenge). Ulman was able to surpass 25,000 and reach the goal.

Ashton Kutcher added a philanthropic element to the race with CNN to reach a million followers by promising donations to Malaria No More if he won. And Kutcher even initiated a follow-up fundraising effort for the charity shortly after. Hugh Jackman recently issued a challenge on Twitter to give $100,000 to the any charity that is best described within the 140 character limit. 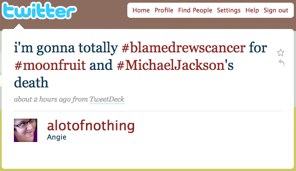 Even on a smaller scale, there are some capabilities that Twitter provides on its platform that other social media outlets don’t have. For example, hashtags are one part of a fundraising effort on Twitter that can make it easy to search and identify a particular trend. Blame Drew’s Cancer (hashtag: #blamedrewscancer) is a great example of this. Drew Olanoff recently contracted Hodgkins Lymphoma, and launched Blame Drew’s Cancer as a way to get Twitter users who are complaining about something to use the hashtag #BlameDrewsCancer. The tweets are pulled into www.blamedrewscancer.com with the hope the Tweets would be tallied to elicit a large donation from a non-profit organization. The site recently announced that Livestrong will be a partner.

The examples I mention above are just a sampling of ways non-profits and philanthropists are using Twitter to fundraise. Twollars and Tweet4Good also offer interesting ways for non-profits to raise money over Twitter. But it’s pretty clear that there are many compelling ways to use Twitter’s viral nature as a valuable fundraising tool for charities.

Some may argue that the thousands raised through social media sites doesn’t match the millions raised through traditional tactics, including direct mail and events. But most charities are relatively late-adopters to new technologies, and the success we have seen this early is probably a strong indication of the potential that is yet to be unharnessed. This isn’t to suggest that Twitter will replace conventional ways of fundraising, but it provides a low-cost, yet engaging way to diversify a charity’s fundraising efforts. And in this economy, diversification is too important to ignore.