It’s not easy to launch a successful WebEx competitor. Most businesses have long since established their “system” for dealing with web meetings, using old standbys like WebEx or GoToMeeting. And those businesses that are willing to venture into the unknown have had plenty of cheaper alternatives to choose from, like DimDim, for quite a while. But that isn’t keeping CallWave from launching one of its own, dubbed Fuze Meeting. And while it’s not going to be an easy space to compete in, Fuze Meeting doesn’t disappoint.

As far as startups go, the history of the company is pretty unique. CallWave was founded in 1998 and went public in 2004, trading on NASDAQ under the ticker symbol CALL. After reaching a peak soon thereafter of over $15 per share, the stock dropped steadily, dipping as low as 50 cents early this year. Deciding to cut its losses, the company delisted itself from NASDAQ on Monday after buying back shares from public shareholders at a 44% premium over the current market value and paying out a total of $10 million. CMO Patrick Moran says that the company did this on its own accord, and that its hand wasn’t pushed by any banks or VCs. CallWave will soon change its name to Fuze Box to reflect its new position as a startup.

While all of this has been going on, CallWave has been building the “fuze platform” that powers Fuze Meeting, which it’s pitting as a sleeker, lighter, and cheaper alternative to services like WebEx. Last fall, the company decided to show off an early version of the product to some press, perhaps prematurely (it was labeled as “incomplete” by CNET). Finally in May, a full eight months after making its public debut, Fuze Meeting finally became commercially available. And only now that the company’s financial wranglings are complete is it ready to really announce it to the public. 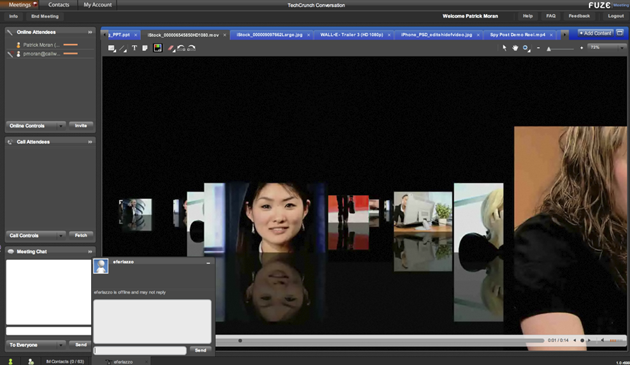 I played around with the complete version yesterday, and for the most part I was impressed. The application is slick and intuitive, and unlike some other screen sharing apps, Fuze Meeting requires no plugins — it should work on just about any browser, and also offers support for both the iPhone and BlackBerry. Screen sharing supports high resolution video sharing, allowing presenters to jump to any point in the video as each participant’s screen is updated in real time. Presenters can also annotate video frames, which will likely appeal to marketing organizations.

While the service is currently working on acquiring free users, it is going to operate under a subscription model of $29 a month, or 12 cents per minute for users who would prefer to pay as they go. This is substantially cheaper than WebEx, but other less well known alternatives sport similar price points, so cost won’t be the only thing Fuze can rely on to differentiate itself.

If you’d like to see a video of the service in action, check out the clip below. Warning: it features Moran’s kids, and may be too cute to handle.