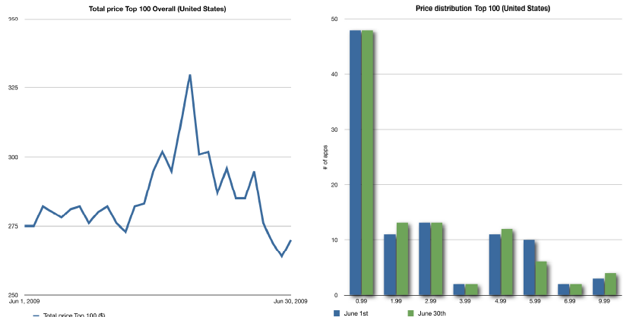 Ever since OS. 3.0, the latest operating system for the iPhone, launched on June 17, prices among the top 100 apps in the iTunes App Store have been fluctuating wildly as developers push out apps taking advantage of all the new features in the OS. Some of the new features we are starting to see in apps include push notifications, turn-by-turn navigation, cut-and-paste, embeddable maps, access to external accessories, search within apps, and subscriptions.

Mobile app distribution service Distimo just put out its June iPhone App store report As you can see from the charts above, the average pricing among the top 100 paid apps was pretty steady until the middle of the month, when developers started to test different price points. The most popular price for an app remained $0.99, but the month of June saw more top apps priced at $1.99, $4.99, and $9.99 (the green bars on the chart above).

Distimo also breaks down pricing by category (see charts below). Medical apps command the highest prices by far (on average, about $8), followed by business, navigation, productivity, and reference (all averaging around $4). The category which benefited the most from the new OS was navigation, thanks to the turn-by-turn directions feature. On June 17, the average price among the top 100 navigation apps spiked by about $1. So it looks like navigation apps have gained some pricing power thanks to a the new OS. 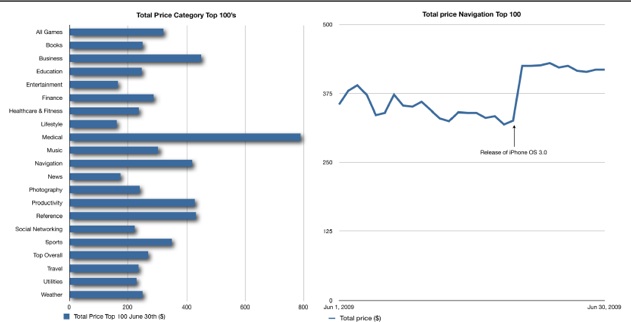