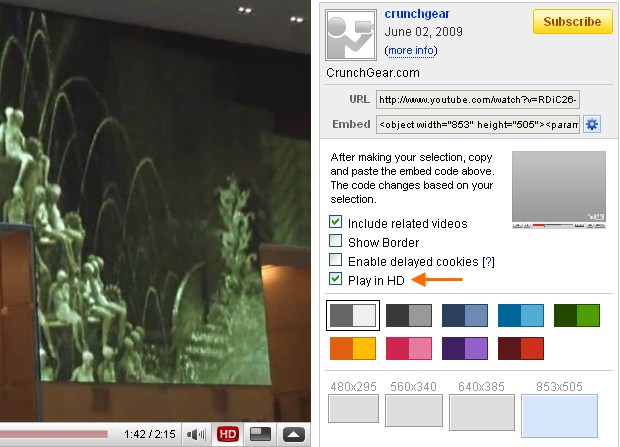 While not every tweak to YouTube’s system deserves a post, this one is pretty significant, though very straightforward as well. First, the 1GB file limit for YouTube videos has been doubled to 2GB; this is a boon to many users who have been uploading high definition content more than a few minutes long. Ten minutes of 1080p footage can easily exceed a gig, especially if you’ve been editing it and weren’t careful about re-encoding. A 2GB limit should soothe that particular pain.

Next, the update now allows for direct linking to HD streams, as well as easy embedding of same. While it wasn’t impossible before now to get an HD video by default on your page, or to link right to one, it required a little work. But now YouTube has apparently decided that they are ready for the bandwidth shock as thousands and thousands of users default to HD instead of SD — increasing the average amount of bits being sent by a huge amount.

Linking to HD is unfortunately not integrated with the UI yet. You have to add “&hd=1” to the end of your link — thusly:

With HD link, without HD link.

And here’s a sample HD embed. It’s not really worth it this size; HQ looks fine and loads faster.

What will the next improvements be? Upload speed is solid, compatibility is good, it goes without saying that they’ve got enough users. More social aspects? More integration with Google Apps? Personally, I’m hoping for a live video broadcast service like Qik — that would make liveblogging things about a thousand percent easier, and I know it’d be Android-compatible. Only Google knows.