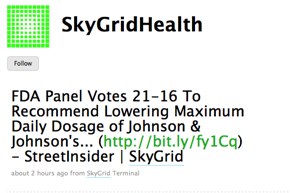 The news aggregator, which only features stories about publicly traded companies, not only has an comprehensive Twitter feed for news stories, but the site also has Twitter feeds that are broken down by sector. So users can follow SkyGridHealth or SkyGridEnergy for sector-related news. SkyGrid currently has separate Twitter feeds for 8 different industries. SkyGrid says that the Twitter feed may be especially useful to users who want to access SkyGrid on their mobile devices.

Similar to TechMeme and Google News, SkyGrid clusters related news stories based on keyword analysis, what they’re linking to, etc. SkyGrid also tries to determine the sentiment of each article – red for negative, green for positive.

As we wrote in our earlier review of the services, SkyGrid is an incredibly useful tool, especially now that it is free. But the one element that is missing from SkyGrid is coverage of larger private companies, like Facebook. In order to become a serious competitor to popular aggregators like Techmeme (which also has a Twitter firehose), the site will need to expand its range of coverage. But especially for people in the financial services industries who use Twitter as a news source, SkyGrid is on the right track to providing users with real-time valuable financial news.