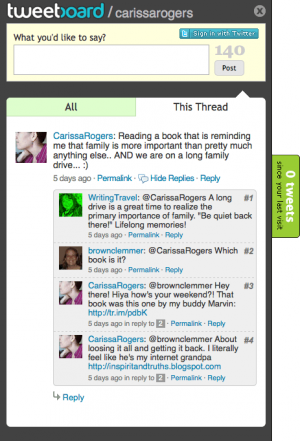 As Twitter becomes the default conversation spot on the Web, we’re going to start to see tools which combine site-specific conversations with Twitter. One example is Tweetboard, which creates a Twitter-powered forum for any site. Once a site adds the Tweetboard code to their site, a site-wide tab appears which allows visitors to have forum discussions by simply logging into Twitter (via OAuth). All the conversations are threaded, and comments appear on Twitter as well, potentially drawing in a larger audience into the specific conversation.

One of the difficulties of following a conversation on Twitter itself is that replies to particular threads aren’t threaded together. On Tweetboard, all the discussions are threaded and nested together, similar to what you’d find on FriendFeed or Facebook. Site publishers can choose to set up a Tweetboard using their personal Twitter accounts or create a new one specific to each Tweetboard.

Packaging conversations and presenting them in a forum place extends any particular site’s forum content to the Twitterverse. The next step is to turn Tweetboard into a commenting system for blog posts and the like. Right now it works only as a site-wide tab, but developer Juan Carlos Muriente says he is working on another version which will be page-specific and could be used as a commenting system. (Of course, Disqus already Tweets out comments for anyone who logs in with their Twitter ID).

Tweetboard is the first project to come out of Muriente’s startup 140ware, and is currently in open alpha.