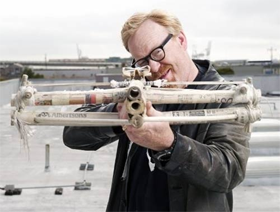 For the last few weeks it hasn’t been unusual to see AT&T among Twitter’s trending topics — following its disappointing performance at WWDC and the activation issues with the iPhone last week, the carrier hasn’t exactly been garnering positive reactions from its legions of Twitter-using members. Today, it’s reached the top spot on Twitter once again, and, once again, AT&T is the target of waves of contempt.

The source of the recent flurry of AT&T tweets is Adam Savage of MythBusters fame, who tweets that for “a few hours of web surfing in Canada” he was charged a whopping $11,000. AT&T is apparently claiming that Savage managed to download 9 gigabytes in Canada using his USB data connection (which he calls “frakking impossible“). What’s worse, the customer service rep Savage was dealing with was apparently a bit loose with their decimal points, telling Savage that “data is charged at .015 cents, or a penny and a half, per kb”. Read that again — there’s a couple orders of magnitude difference there.

Now Twitter is in revolt. With over 50,000 followers Savage has a pretty loud voice, and his outraged tweets certainly resonate with a broad audience. In the end, he’ll probably get a pass from AT&T — nobody wants to mess with a man who blows things up for a living. But it’s clear that AT&T needs to work on letting its customers know when they’re spending exorbitant amounts of money on data charges. An AT&T spokesman says that any phone taken abroad that begins racking up excessive charges will automatically receive an SMS alert, but apparently there are no such mechanisms in place for members using the increasingly popular USB wireless connections.

Update 2: You can in fact receive alerts through SMS messages sent to your LaptopConnect device, which will appear in the associated software on the computer. AT&T also says that it often Emails the account on record and sometimes calls the account.