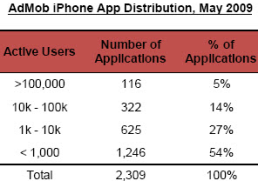 AdMob has released its metrics report for May 2009 (PDF download link), and looked closely at the actual distribution of users of the iPhone apps in their network this time. The main take-away? There may be tens of thousands of applications available for the iPhone, but a whole lot of them simply never actually make it onto the device.

Out of 2,309 tracked applications (representing 15.1 million unique iPhone and iPod Touch users), no less than 54% are actively used by south of 1,000 persons. That’s a very long tail there, and not an economically interesting one at that. Only about 20% of the tracked apps have more than 10,000 active users, and only 5% (or 116 apps) boasts more than 100,000 active users. For the record, an active user is considered to be someone who used the app at least once in May.

Two caveats: the AdMob network evidently doesn’t cover all applications available for the platform in its entirety, and the large majority of those it tracks are free of charge. That means two things: there’s no indication that these findings can correctly be extrapolated to the entire iPhone app universe, and it’s likely the curve is less steep with paid applications (usually, you’d be more actively engaged with an app you paid for than a free app you downloaded just for testing).

The report also correctly points out the App Store ranking system feeds the success of top applications, particularly when they are featured on the Apple website in combination with getting rave reviews. 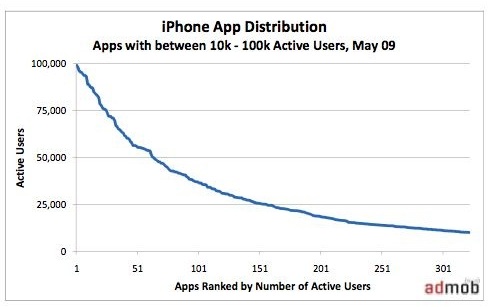 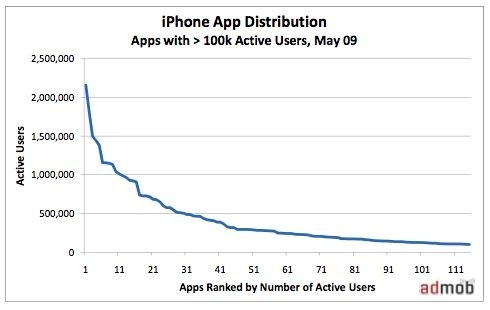