More than a few people have left comments on our Twitter posts related to the Iranian situation wondering if they weren’t really articles by the satirical site, The Onion. Here are two that come to mind, Twitter Reschedules Maintenance To Allow Iranian Protests To Continue and Bush Advisor: Twitter Founders Should Get Nobel Peace Prize. Well, The Onion finally has one of its own. And as you might expect, it’s good.

The post is short, sweet and to the point. But the best parts are the fake quotes by Twitter co-founder Jack Dorsey:

“Twitter was intended to be a way for vacant, self-absorbed egotists to share their most banal and idiotic thoughts with anyone pathetic enough to read them,” said a visibly confused Dorsey.

“When I heard how Iranians were using my beloved creation for their own means—such as organizing a political movement and informing the outside world of the actions of a repressive regime—I couldn’t believe they’d ruined something so beautiful, simple, and absolutely pointless.” Dorsey said he is already working on a new website that will be so mind-numbingly useless that Iranians will not even be able to figure out how to operate it.

In all seriousness, Twitter has been proving to be an amazing tool during this crisis, but I’ll admit that the headlines here and elsewhere often do read like Onion headlines unintentionally. 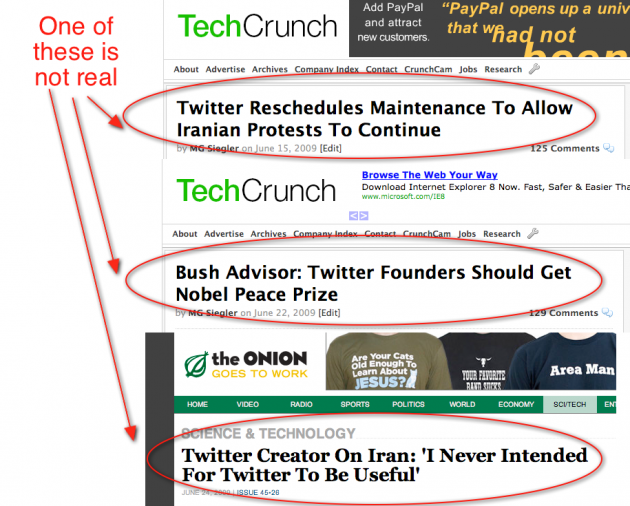