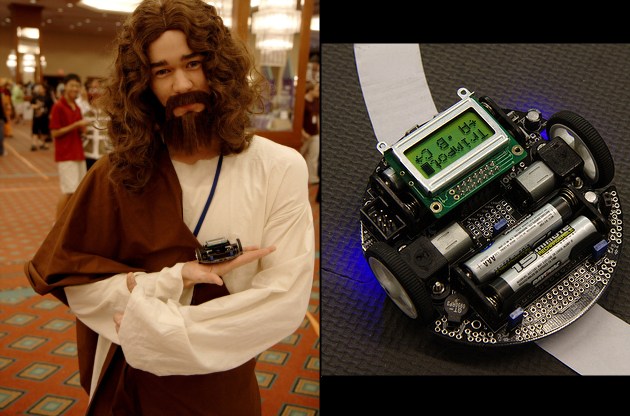 Before you get excited, I should probably state for the record that the headline is totally fake. There’s no way to tell whether Jesus actually recommends this robot &mdash he’s just holding it. He might not like it at all. But if that’s the case, I would have to respectfully disagree with him there, because this little robot looks like a lot of fun.

It’s a pretty simple little guy, as robots go: all it does is follow any line you put it on, at a speed of up to 3ft/s. That’s pretty fast for a robot the size of a CD.

It seems that at a recent robotics conference they were having a blast with these little things. They’re called Pololu 3pis, and they cost about a hundred bucks. I think any party would be livened up by a few high-speed rollerbots, but I lack the programming skill to make these guys go. I might start taking night classes, all these little Arduino setups and coffee bots are making me jealous of the creative hackers out there.