Posterous, the dead-simple service that makes it super easy to share your blog posts and media across the web, has acquired Slinkset, a startup that allows users to quickly build social news sites similar to Reddit and Digg. Slinkset.com will continue to operate, with Slinkset co-founder Brett Gibson joining Posterous full-time. Terms of the deal were not disclosed.

Both Slinkset and Posterous launched last summer as part of the same Y Combinator class. Slinkset is a white-label service for building your own custom social news site in a matter of seconds (think Digg, but with your own logos and a customized design). Slinkset isn’t the only company in this space — when it launched last July I noted its similarities to a handful of other services, including Reddit, which had recently gone open-source and allowed for custom sites. But while it may not be terribly unique, it’s easy to see why the Posterous team is interested in Slinkset.

Posterous cofounder Garry Tan says that the company is going to build “massively engaging sites for both content discovery (via social news) and content posting (via blog streams)”. Beyond that details are scant, but it’s not difficult to imagine the kind of features Posterous may begin to implement. Up until this point the site has been heavily focused on helping you share content, but there hasn’t been much in the way of social interaction. Slinkset’s technology will definitely help with that — my guess is that there will soon be an option to allow users to upvote posts on your Posterous account, causing the most popular media and blog posts to float to the top.

A pair of sample Slinkset sites 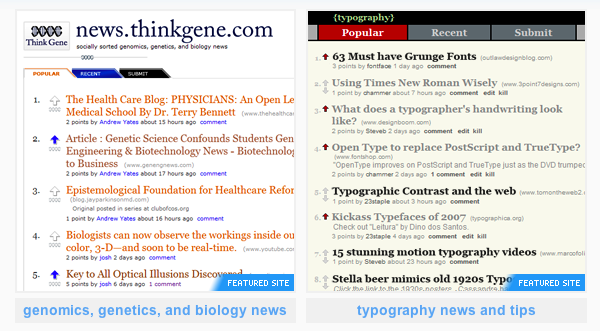 Aside from the acquisition, Posterous is pushing forward on other fronts. The site has released optimized support for the new iPhone 3GS, allowing users to Email videos directly from the phone which are then automatically rotated properly and posted to your Posterous blog (as well as any other services you have linked to it, like Facebook). The service also now supports importing blogs from major platforms including Blogger, WordPress, and Tumblr (the site will automatically import both text and media files into your Posterous page).