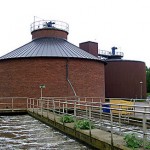 Quick note for those four of you that are interested in the future of Flint, MI’s biogas facility: It has a green light. The city council voted 6-1 last night, paving the way for America’s first human waste to biogas facility. Eventually, the plant might produce biomethane, which could be used to fuel municipal vehicles such as city buses.

The best part, for the Flint at least, is that the city coffers aren’t being tapped at all; not that there is much to use anyway. The project is a partnership with the State of Michigan, City of Flint, Flint’s Kettering University, and Swedish Biogas International. And once the plant is complete, the odorless gas will be used to heat it. Officials expect the construction to begin this August, which is at least a full six months before the San Jose biogas plant announced recently (via) will break ground.

So look out America, Flint is rising from the sewers on a cloud of fart gas.