For the past few days, we’ve been digging in pretty deep against Microsoft for its odd way it’s trying to push IE8 online. And we were hardly the only ones. Apparently, Microsoft was listening.

Today, it has changed the worst of those campaigns, the “Ten Grand Is Buried Here” one, to remove the restriction that required you use IE8 to have a chance to win the money. Previously, there were 4 rules for the promotion, but Microsoft cut those in half, removing the ones that told you to get rid of your current browser and download IE8. More importantly, it removed the language that told users to “get lost” if they were using anything besides IE, and implying they were idiots for using any other browser.

The Microsoft blog I Started Something tries to spin this as Microsoft just making changes to make more clear what it always intended for the campaign, saying that “get lost” was meant to be “get lost in the hunt” (both have since been removed from the site), and saying that, “The “it’s not as stupid as it sounds” text in the footer was always in context of the “tell a friend” messaging. It implies that telling your friends about this competition is not a bad idea since you might not have the chance to follow or solve all the clues yourself. Some people obviously misinterpreted that.”

From what I’m hearing, Microsoft was not happy at all with Australian team for this campaign (the MSFT Aussies made it) and made the moves to correct it. Now anyone, using any browser, has a shot at the money.

Smart move, though I’m not sure it will fulfill the original intention: To get more people to use IE8. But they’re still trying. The key line says, “How will you know if you’ve found it [the money]? It’s a cleverly concealed webpage you can view on Internet Explorer 8.” “Can” is the keyword there, you don’t need to use IE8, but you can, to view it.

I think I will use Safari or Firefox to look for the money. 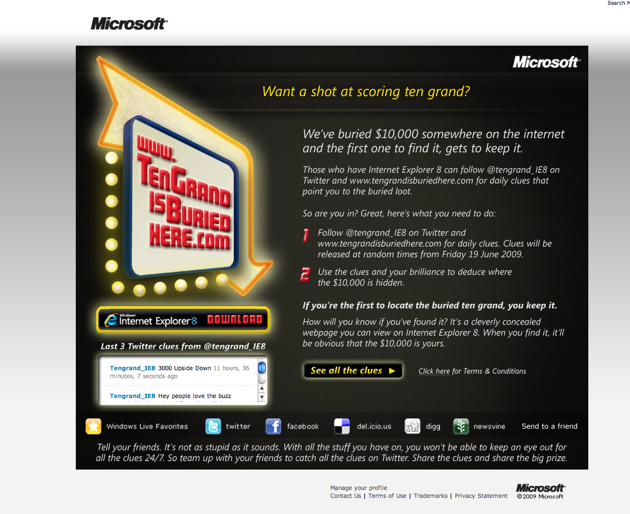