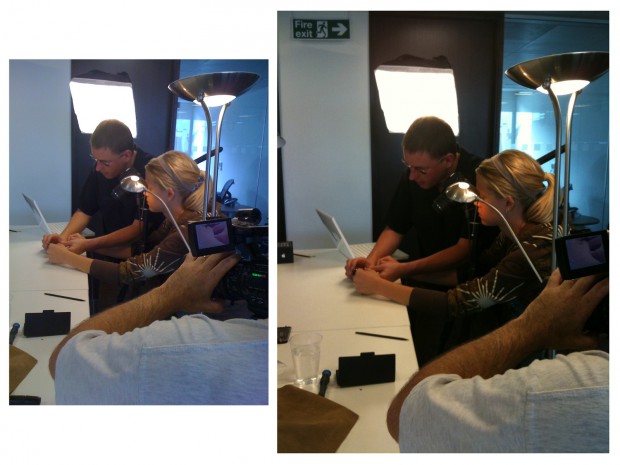 Here are some comments from iFixIt’s tear down of the 3G S. Theirs also included a girl.

* Thankfully, opening the iPhone 3G S is as simple as the 3G. After
removing two Phillips screws, the two halves of the phone are separated
easily using a suction cup.

* The iPhone is differentiated externally only by a new model number,
A1303. The lettering on the back is now shiny, like the Apple logo.

* The internal physical design is virtually identical to the iPhone 3G.
A random passerby on the street would not know the difference. Heck,
even we were struggling to differentiate the two.

* There’s still a “Do not remove” sticker above the logic board.
Naturally, we removed it.

* Nearly all components have been relocated to the front side of the
main PCB, including the Bluetooth, Wi-Fi, and Flash memory chips.

* The battery is 4.51 Watt-hours, or 1219 mAh. That’s about 6% larger
than the iPhone 3G’s battery. Hopefully the hardware runs more
efficiently, since increased battery life will not come from the battery
itself.

* There is an additional antenna connection near the dock connector.
We’re not sure what for just yet. However, we do love exploring these
teasers… Stay tuned!

* For those who are wondering about the fingerprint-resistant coating on
their iPhone 3G S screen: The oleophobic, or oil-proof, technology
evolved from waterproofing. Oil-proof technology is harder to achieve as
oil has a much lower surface tension than water, so it spreads out
easier and thus is harder to get rid off. MIT’s solution was to create a
coating material which creates a layer of micro fibers, but with a much
larger contact angle between the oil droplets and the fibers.

Some comments on usability of the 3G S:

* Camera quality is much improved from the 3G. Close-up shots were
possible down to about 5 cm, and the brightness adjusted well when
picking a focus area.

* The oleophobic screen does seem to clean slightly easier than the 3G’s
normal screen.

* Google Earth (duration of the spinning load wheel) (over Wi-Fi): 3G
S: 4.9 sec; 3G: 22.2 sec. A bit faster than Apple’s claim of 2X speed
improvement — although we know that one simple test of one application
means little in the real world.