As we become inundated with more and more streams of data from Twitter, Facebook, blog, Flickr, and everywhere else, we need better ways to search what is happening right now. Twitter, Facebook, and Google are working on their own real-time search efforts, along with a slew of startups including OneRiot, Scoopler, and CrowdEye (which launched last night). The latest entrant in the real time search wars is Collecta It just launched a few minutes ago, and it scours the Web for real-time information. Results come from Twitter, of course, but also from news feeds, blog posts, comments, and Flickr photos. Status updates on Jaiku and Identica are also captured.

If you do a search for iPhone, for instance, you will get a constantly updating stream of results which flow down the middle column of the page. If you click on any result, you will see a bigger version of the Tweet or the entire comment or feed item on the right. You can filter the stream by stories, updates, comments, or photos by checking boxes on the left under Search options.

Everything Collecta collects and indexes is then pushed out via an XMPP stream, which means that your search results get updated the second that Collecta recieves new information.

When CEO Gerry Campbell gave me a demo yesterday, I asked him why Collecta doesn’t rank results by some sort of authority instead of simply showing a chronological stream. Campbell used to be the president of search at Rueters, and before that the SVP of search at AOL. So he is very familiar with the traditional search mindset of trying to show the most “relevant” results. He suggested that those types of filtering options could be added in the future, but he wanted to start out with a new experience.

What you are getting with Collecta is the pure stream of what is happening right now. If you want to refine that then you can do that by refining your search terms. He wants to encourage users to perform searches and let the results wash over them. The second he starts re-ordering results by some sort of authority ranking, then something that happened an hour ago or last week might turn up at the top of results. (Of course, a simple time decay could solve that problem).

I appreciate that he is trying to encourage new forms of interacting with search results, but at some point I think he really needs to add relevance filters as well.

Collecta was founded in November of 2008, and raised $1.85 million in a series A round which closed in March 2009. True Ventures and Campbell were the investors. The company was co-founded by Jack Moffitt, Brian Zisk, and Patrick Mahoney. Derek Powazek of JPG Magazine fame is the creative director. 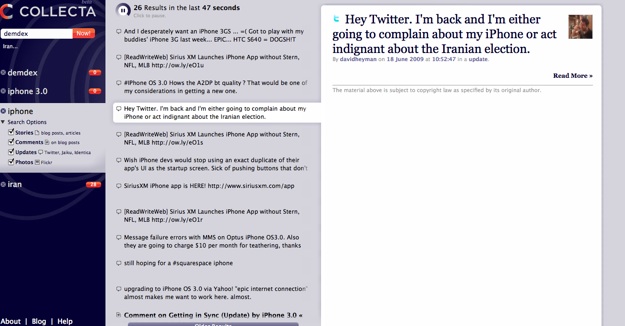