Tinker, the recently launched microblogging topic tracker from Glam Media, will be rolling out several new features to upgrade its service. Tinker, which we covered in depth during its launch here, allows users to quickly browse through different real-time Twitter and Facebook searches relevant to various current events, trends and breaking news. Each event, trend or news item is associated with one or more terms, which Tinker then searches for across all Tweets and then presents the relevant ones in a single stream.

Tinker is launching a people section that allows users the ability to search and discover people on Twitter. Users can find people by name, but also by location and profession. This feature ends up being a comprehensive directory of Twitter users, listed by profession, category or interest, that helps find, follow and filter people that are micro-blogging. Tinker also lets you see the most popular and influential of the Twitterati, by categorizing the people that create events and breaking news by topics such as Information Technology, Media and Real Estate. Within each category, Tinker offers sub categories of popular Twitter users. So under politics, you can search for Twitter user who blog about conservative, liberal and Republican politics. 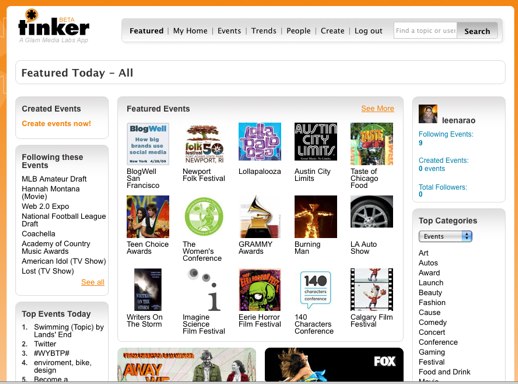 Tinker has added a featured page, which provides users with lists of hot topics and trends to follow on Twitter, including streams on events, news, celebrities, and topics. Similar is the look and feel of the iTunes homepage, Tinker’s featured page let you browse through categories of the top trends on Twitter. And Tinker now allows a large range of topics to be tracked semantically, creating a powerful search capability across Twitter.

On of Tinker’s most innovative features is the ability to go viral with widgets. After creating an event, users can share the event’s feed using an embeddable widget, which they can place on their webpage or blog. These widgets allow users to both view the feed of an event and to submit their own messages, which can then be sent to Twitter and eventually sites like Facebook and FriendFeed. Samir Arora, Glam Media’s CEO and founder, says that the widgets are being used by brands and companies for advertising purposes. For example, the movie “Away We Go” has created a branded widget and event page, with a video and Twitter stream that can be embedded on any site (see below). Tinker says that the site is now running over 50 million widgets and applications a month on distributed sites and networks. Widgets are getting a slight upgrade, and now let users make widgets in different sizes and colors.

As we said in our earlier review of Tinker, the site is the perfect answer to Fred Wilson’s call for a Twitter events firehose—a place where users could input a handful of keywords collectively referred to as an ‘event,’ which could be used to monitor current news as it happens in near real-time. Of course, there are trending topics on Twitter (which can be misleading) as well as a plethora of Twitter apps out there that try to tell us what exactly the buzz is on Twitter. But Tinker does this and more by doing most of the work for users-by categorizing topics and events, dividing Twitter users by the topics they Tweet about, and letting anyone embed real-time streams into their own sites.
50 million impressions