Dead simple mobile payments for micro-transactions on the web are slowly gaining traction and a new, well-funded player has entered the growing space. Recently launched mobile payments startup BOKU has acquired competitors Paymo and Mobillcash and raised $13 million in Series A funding from Benchmark Capital, with Khosla Ventures and Index Ventures participating. BOKU did not disclose how much the startup paid to acquire Mobillcash and Paymo.

BOKU, Paymo and Mobillcash all function in a similar way to make micropayments for games and applications. BOKU’s system doesn’t require users to have a credit card or bank account. Users enter their cell phone number on the site, reply to a Paymo text message and then all virtual charges are automatically charged to the user’s monthly cell phone bill. It’s disarmingly easy.

BOKU is gaining a significant international base with the acquisition of Paymo and Mobillcash. Paymo and social network hi5 recently partnered to let members in 24 countries use their mobile phones to purchase hi5 Coins, hi5’s virtual currency. Paymo is available to hi5 users in the U.S., Canada, France, Hong Kong, Thailand, Russia and Colombia thanks to a cash system that accepts and processes various types of currencies. Paymo’s technology can be accessed in 45 markets around the globe, enabling mobile payments in Europe, North and South America, the Middle East, Africa and Asia.

Paymo recently expanded service in the U.S. after striking deals with mobile carriers AT&T, T-Mobile and Virgin Mobile to allow users to make online purchases using their phone. Mobillcash is UK-based and has a strong presence mainly in Europe. With these acquisitions and global reach (53 countries), BOKU has been able to secure partnerships with most major global mobile carriers. BOKU’s will initially launch its services on Hi5, Puzzle Pirates, Aeria Games, and on multitude of apps on Facebook and MySpace. 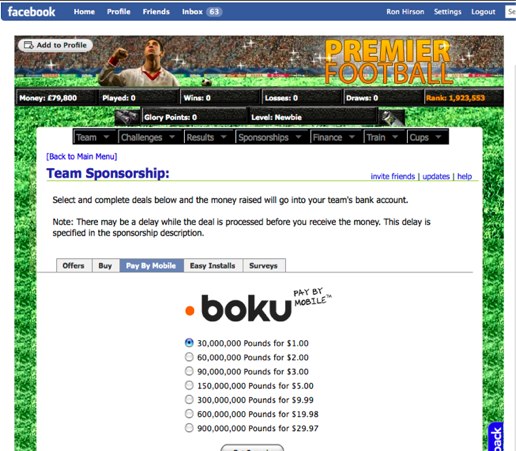 Paymo has said in the past that 75 percent of the online community worldwide does not have a credit card but 3 billion consumers own a mobile phone. And the market for online payments via mobile is being driven by the growth of virtual goods and games on social networks and mobile applications. With that in mind, mobile payments, which avoid credit cards or bank accounts, have the potential to take off.

But there is one obstacle to mobile payments seriously becoming a viable micropayment option. Often, mobile carriers charge costly fees to the payment systems (which are then passed on to the consumer) remains a serious problem. BOKU says that different cell phone carriers charge varying fees that range between 10% to 50% of the purchase price, which is a pretty large amount in transaction fees. As we said in our earlier analysis, this could pose a significant roadblock to these types of services, which channel user payments through mobile carriers. It appears that it would be hard to sustain these fees in the long term.

But if mobile carriers lower their fees, mobile payments have the potential to be the go-to way to pay for microtransactions. And BOKU, with its recent acquisitions and funding could be in prime position to make this happen in the space. Competitors to BOKU include Zong (a former TechCrunch 50 exhibitor) and Netsize.

Dead simple mobile payments for micro-transactions on the web are slo...