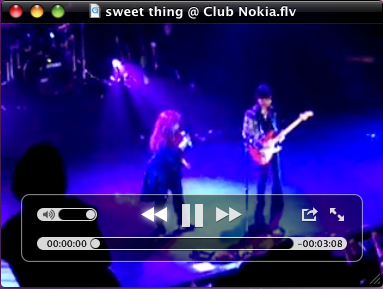 The blog, Cateto blog dug up this seemingly small detail that was overlooked during all the other Snow Leopard WWDC announcements. But it’s anything but a small detail. Because if it’s true, that means that this same functionality could very well make it to the iPhone and iPod touch, as Cateto points out.

Unfortunately, Cateto doesn’t offer any further detail about how he found out about this .flv support. He simply states is as a fact (I’m going to presume he’s being playing with the developer builds), offers a screenshot, and goes into some detail about how it will work on Snow Leopard. Apparently, after taking a little bit of time to load (depending on the size of the file), the Flash video files will start playing in QuickTime without any conversion needed. And if you want to convert the file to something like H.264 (the video compression format Apple loves to use), you can do that too.

So while this is by no means a surefire proof of Flash video support coming to the iPhone or iPod touch (as many commenters are noting, the .flv support doesn’t necessarily mean QuickTime would be a Flash player, it could simply play those files if you can get them from somewhere), it is pretty interesting. Apple has so far resisted allowing Flash videos to play on its device because it claims Adobe’s Flash Player offers poor performance on the mobile side of things. Perhaps Apple has taken a backdoor way to add a certain level of support for Flash video.

UPDATE: As many of the commenters have pointed out, and the Cateto blog has just confirmed, it looks like he simply had the QuickTime add-on Perian installed without realizing it. Sorry for the confusion. It looks like Flash will remain on the iPhone wish list for some time.