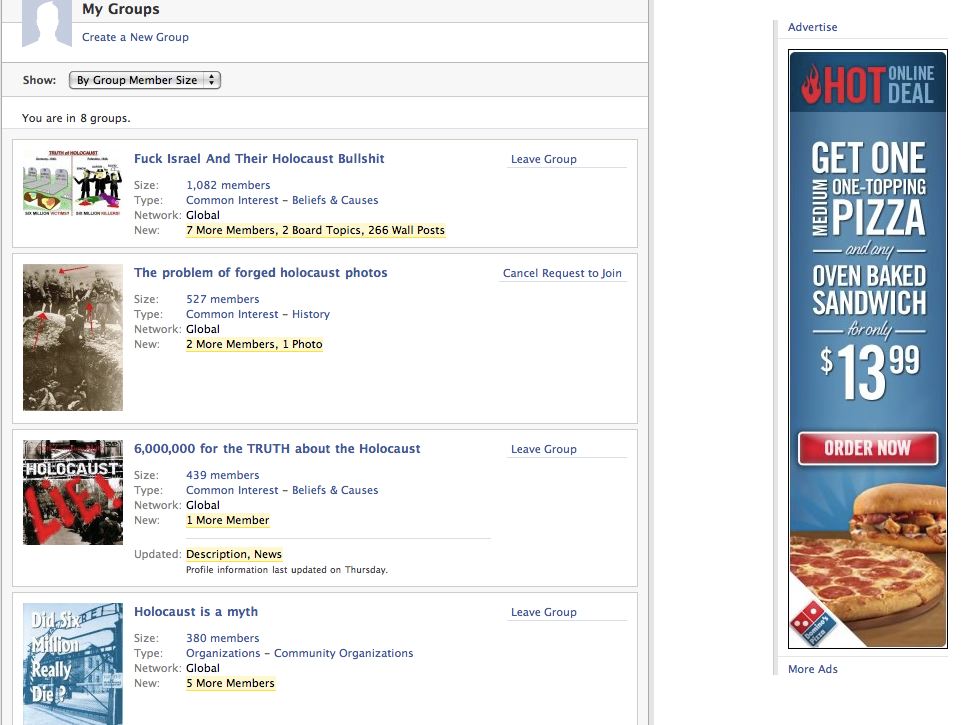 Earlier this week a Holocaust denier shot and killed a guard at the Holocaust Memorial Museum in Washington DC. Facebook didn’t change its policy on allowing Holocaus denial groups, even though one group quickly put up a cartoon mocking the event.

If attacks on Jews by Holocaust deniers won’t be enough to sway Facebook that this is all hate speech, perhaps angry advertisers will do the trick. Brian Cuban has been tracking advertisers who have insisted their ads don’t show up anywhere near Holocaust denial pages on Facebook, and at least one who doesn’t want ads to be placed on profiles of people who are members of such groups.

Domino’s Pizza’s Social Media Specialist Phil Lozen wrote to Cuban saying that “initially, Facebook was pushing back on their ability to block ads” from some of the pages. But as of today even pages showing search results for hate groups won’t have Dominoes ads. He also says that Dominoes would not have purchased ads at all if they knew of the possibility of their ads appearing near Holocaust denial pages.

What we really need are a set of large advertisers to boycott Facebook entirely until these groups are banned. There’s a reason why eBay and other private companies won’t let this kind of hate speech on their sites. It’s bad for business. And as soon as Facebook realizes that, they’ll change their policy. Then look for lots of talk from Facebook employees about how proud they are that their company did the right thing – [insert current policy here].

And for those of you who will argue that the best way to handle hate is to shine a light on it, debate these people openly, and generally assume that reason will prevail: you’re wrong. Read this USA Today opinion piece that is talking about the steady rise of hate groups in the U.S. – “the Internet gives formerly isolated racists, whether individuals or small groups, a means to stoke one another’s smoldering anger. With the ready availability of weapons, even a single person can do enormous harm.”