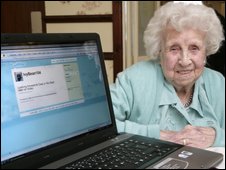 Believe it or not, but some people actually refuse to go online! (I say we salute these people for being so brave.) This news comes to us from that Digital Britain report that I’ve mentioned in the past. It’s sort of a Doomesday Book vis-à-vis the UK’s participation in the digital world/economy, if that makes any sense. And today’s big number: 43 percent of adults in the UK who have no Internet access, either by choice or because of financial restraints, would turn down a free or heavily subsidized Internet connection. Like Clint Eastwood in Gran Torino, these people simply have no time for that Internet crap. I mean really, what is this old lady going to do with Twitter?

While on one hand you can say it’s not really a big deal—again, why would a retiree, who was in the war, mind you, want to spend all day on Mashable and YouTube?—on the other hand there’s some legitimate use for the Internet. That Underground delay, caused by an “industrial action,” was all over the Internet yesterday; an independent report found that the average household can save up to £70 per month by shopping online; newspapers are becoming online-only; etc. So, while the Internet, I feel, is largely nonsense and pornography, there’s some utility to it.

Now the problem becomes convincing the hold-outs to go online. Of the people who outright refuse to go online, 61 percent have never owned a computer. Schemes such as half-price computers and subsidized Internet connections may never convince these people to change their mind.