StockTwits and WallStrip founder Howard Lindzon is at it again, 140 characters at a time. After buying out Chart.ly, thus attracting its lead developer Adarsh Pallian to his latest venture(s), he has now also acquired the latter’s other Twitter-related project Tweetizen, we’ve learned today.

Furthermore, it seems like Lindzon is also spinning off a Twitter -only incubator / fund along with some of his partners at Social Leverage, dubbed 140Labs. Currently, the 140Labs website actually leads to a Twitter web service that enables anyone to set up communities on any given topic (much like StockTwits), but we got confirmation that a separate company bearing the same name has been formed together with Dan Kelly, James Altucher – who was appointed CEO – and several other individuals that aims to incubate other projects related to the popular micro-sharing service. This is kind of similar to what Betaworks, an investor in StockTwits and co-investor in TweetDeck together with Lindzon, is doing.

The first upcoming initiative from the 140Labs team will be I’m Big On Twitter, which can quite accurately be described as a HOTorNOT for Twitter users. The service is not live yet, but Pallian gave us a sneak peek at it earlier today. There’s not much to explain about the service, especially if you’re already familiar with HOTorNOT. You can use your Twitter avatar or upload a picture from your computer, and others get to rate the way you look on a scale from 1 to 10 and follow you on Twitter while they’re at it. That’s about it, although a related dating application is apparently also in the works.

More Twitter related services are on the way, Pallian told me, including one that aims to compete with Super Chirp which yesterday launched as the first service that enables Twitter users to monetize their message streams. 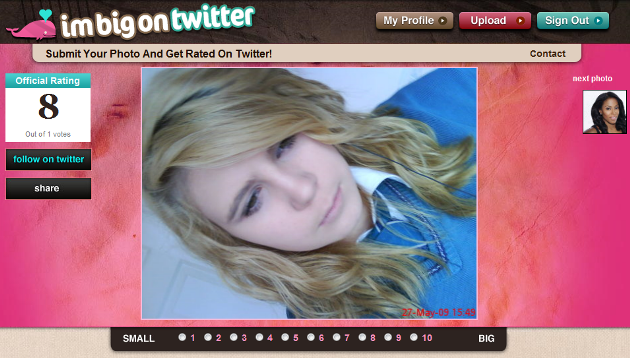