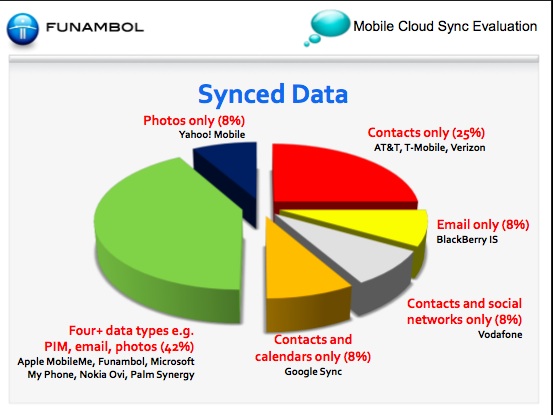 As the phones in our pockets become our second computers, it will become increasingly important to sync data between the two. Not just emails, but contacts, calendars, photos, music, apps, browser bookmarks, files, and more. Nearly every Web phone out there comes with at least some sort of rudimentary syncing app. Apple has MobileMe, Nokia has Ovi, Palm has Synergy, Blackberry has Internet Services, and Microsoft has My Phone.

An open-source competitor to all of these is Funambol. The startup evaluated all of the syncing services and scored them based on criteria such as how many kinds of data each one supports, cost, usability, and number of supported devices. (Full study embedded at bottom of post). It came up with a score for each out of a maximum of 40. Naturally enough, Funambol scored the highest, but if you throw that out you end up with the list below (with accompanying scores).

As you can see, Nokia’s Ovi edged out Apple’s MobileMe, but that was because it offers a free version, supports more phones (although, they are all Nokia), and can sync photos with Flickr. Despite MobileMe’s early hiccups, Apple seems to have fixed the problems. MobileMe supports a lot of different data types (email, photos, contacts, calendar) and gets high marks for usability.

Palm, Microsoft, and Vodafone’s Zyb all tie for third place. And Blackberry has a poor showing in fifth place after Google Sync.

Blackberry’s service is the most expensive at $20 a month,and it only syncs e-mail. MobileMe is about half that price, but still not cheap enough. Nearly three quaters of the syncing apps are free. 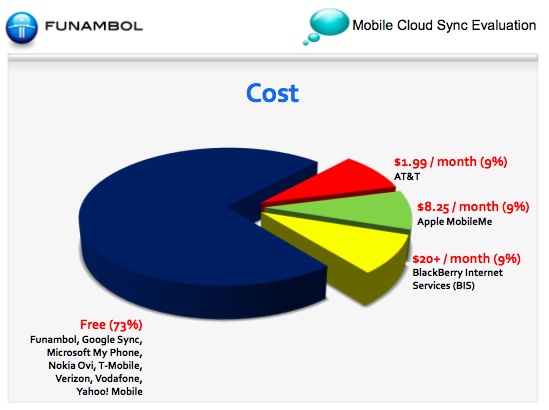