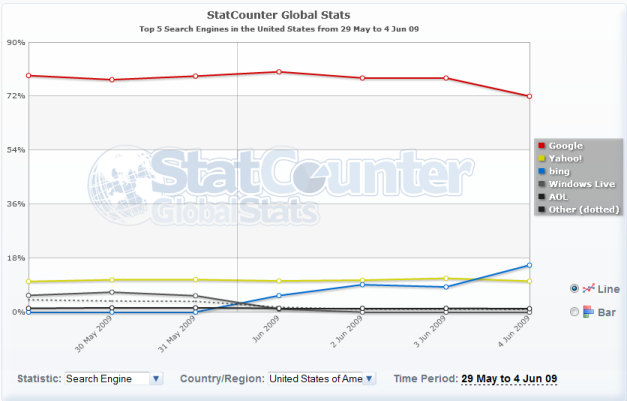 Data from monitoring service StatCounter suggests that Bing, Microsoft’s new decision engine, has overtaken Yahoo Search as the number two search service in the U.S. and worldwide in large part thanks to stealing market share from leader Google.

Are people just test-driving Bing en masse, or does this have anything to do with the fact Bing was forced upon IE6 users (now fixed)? Or is it just because it’s that good and the advertising is already working? Either way, the jump Bing appears to have made since launching merely a couple of days ago is significant, and the drop you see in Google’s share even more so.

Are we witnessing the birth of the first true Google challenger or is this nothing but launch momentum bound to fade away?

(StatCounter claims to measure the search and browsing behavior of over two million users and says it tracks in excess of ten billion pageloads per month over its network of three million websites.)