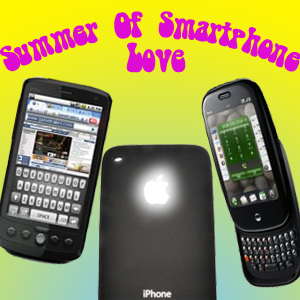 Can you feel the tingling in the air? If you haven’t found it already,you will. This is going to be the summer of love. I am talking, of course, about smartphone love. The serenades have already begun for the June 6 launch of the Palm Pre. Next week, Apple will reveal it’s next iPhone (you know MG is going to get one). Blackberry might come out with its second Storm by summer’s end. And the lovefest will continue throughout the year with launch after launch of new Android phones as well. It will be practically nonstop. I hope you can handle it.

These aren’t just attractive new playthings. They represent something much deeper and more meaningful. They represent a major transition in both the mobile phone industry and in mobile computing. The iPhone paved the way, but now the Web phones are ready to take over the world. Their relative numbers compared to basic feature phones may still be small, but their mindshare and profits are large. Already, the iPhone and Blackberry Web phones are gobbling up a majority of the industry’s profits.

Why? It has nothing to do with making phone calls. The Web in your pocket means you always have something to read, you are always connected to your digital network, and you can always reach out and Tweet someone or poke them or send them an email. And if all that fails, you can still call. But the problem with actually speaking to someone is that you can only carry on one conversation at a time. With a Web phone, you can keep track of your entire conversation stream.

The iPhone has been around long enough that everybody wants one. But if you don’t like AT&T, now there will soon be plenty of other options. Everyone is obsessing about the Palm Pre today, with its Twitter search and soon-to-be blocked iTunes syncing (maybe). John Biggs at CrunchGear thinks the Pre will be an also-ran, but it will probably be the biggest-selling also-ran in Sprint’s lineup. Today’s preliminary Plam Pre excitement will soon be overtaken by iPhone mania (it might have a glowing apple!).

The new iPhone will still be missing some crucial things, like the ability to run more than one app at the same time. And this will leave an opening for BlackBerry to keep growing side-by-side the iPhone and for the the steady march of Android into the realm of significance numbers-wise. Before you know it, everyone will be carrying a Web phone of one kind or another. But be careful. These shiny new beacons promise to free your mind, but they also have the power to drag you down. They demand attention at all times, even when you are walking down the street. Remember, it is important to look away every now and then, otherwise you might get hit by a car.